Samsung and Intel backed Tizen mobile OS has seen innumerable delays, but seems it’s not too long before we actually get to see the first Tizen smartphone, the Samsung ZEQ9000. According to a report from a Korean tech site, Samsung ZEQ9000 looks like a mix of Galaxy (hardware) and Windows Phone (UI). Below is the leaked press shot. 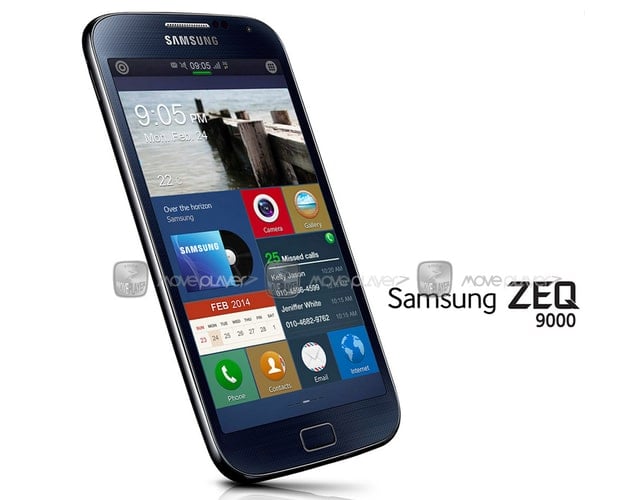 The report also mentions about provisional specs of the first Tizen smartphone. It comes with a 4.8-inch 720p (HD) display, powered by a 2.3GHz Qualcomm Snapdragon 800 quad-core processor. No word on other details like RAM, camera and internal storage.

From the leaked image, we can see that the externals look very similar to the existing range of Galaxy smartphones, while the UI is reminiscent of Windows Phone’s square tiles UI. The calendar widget indicates the launch date of February 24th 2014, which happens to be the day MWC 2014 kick-starts in Barcelona. The taskbar on top is similar to Android, but with center-aligning icons. The App drawer shortcut is on the top right corner, which is an odd place to be.

Talking about Windows Phone inspired UI, even the Nokia’s rumored Android smartphone boasts of a tile based UI. Nokia X as it’s now rumored, is expected to launch at MWC as well.

Over the past few weeks, we’ve been getting hints about Tizen based announcements at MWC 2014, but some reports were suggesting otherwise. This latest leak strengthens our belief of finally being able to see the first ever Tizen smartphone at Barcelona next month. TechPP will be at MWC to bring you all the news, previews and hands-on with this new smartphone. Stay tuned.

Update: Our sources confirm that this leaked image is in fact the first ever Tizen smartphone and those widgets are expandable content holders (live tiles). Unfortunately, we might not see the phone at MWC 2014, as our source indicates that the launch has been pushed further to accommodate other launches (psst… Galaxy S5).