At the 2014 Mobile World Congress edition in Barcelona we’ve seen plenty of cheap smartphones that caught our attention. At the same event we’ve seen HTC launch two new mid-range devices: the Desire 816 and Desire 610. Now, the Taiwanese company has announced another budget smartphone from the same product line – the Desire 310. There’s nothing to get excited about this new handset, perhaps only the price, which some say will be at 169 euros. 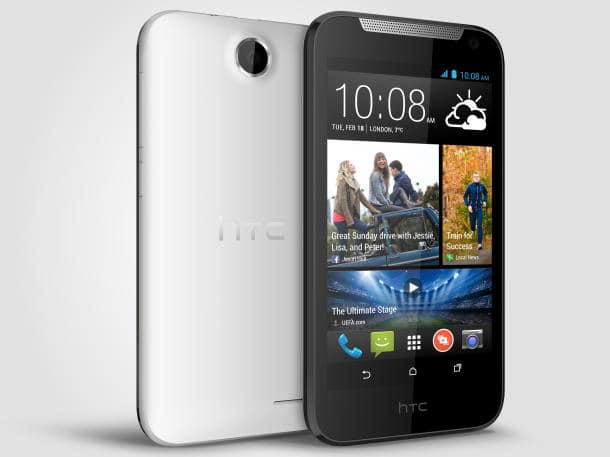 The HTC Desire 310 comes with a 4.5 inch display with a 480×854 resolution touchscreen, a quad-core 1.3GHz Mediatek processor and on the software side we find Android 4.2.2 Jelly Bean. This is not a clean, vanilla Android, but rather HTC’s own Sense skin which brings such features like the HTC Blinkfeed and Zoe. Inside the HTC Desire 310 we also find 1GB of RAM, only 4GB of internal storage, expandable up to 32GB via microSD card, a 5MP rear-facing camera, a VGA front-facing camera and a 2,000mAh battery. Speaking of the launch, HTC CEO Peter Chou said the following:

Everybody today wants a smartphone that can keep up with them, regardless of whether it is a flagship or entry-level model. The latest addition to our renowned HTC Desire range combines super-fast processing and premium features at a lower price, offering users the best possible experience in this category.

The 2,000mAh battery seems to be enough for the handset to have a pretty good battery life. And even if it doesn’t house a power machine, the quad-core processor should be able to sustain most of your daily tasks. Of course, the handset would have been far more attractive if he had a 4G radio chip inside.

HTC’s new budget smartphone comes with about the same size as the Moto G, measuring 132x68x11.3mm and weighing 140g. So, it shouldn’t feel neither too thin, nor too bulky – just typical. The launch of the HTC Desire 310 comes just less than two weeks before the expected launch of the HTC One M8 on 25 March. The smartphone will be available in a number of colors including black, white and orange and the official price hasn’t yet been made available.

Was this article helpful?
YesNo
TechPP is supported by our audience. We may earn affiliate commissions from buying links on this site.
Read Next
HTC is back after a long time with Wildfire R70 with Helio P23
#HTC