It seems that Apple is making some important internal changes as the Cupertino giant has today launched a new cheaper version of the polycarbonate iPhone 5c – the 8GB model. When Apple introduced its fifth-generation iPad Air, it was pretty weird that the company had decided to discontinue the iPad 4 and keep on the market a much older iPad 2. But this was a smart financial move, because building an iPad 2 is cheaper than building an iPad 4 and Apple would thus get a much bigger profit margin. And there were still enough buyers, like schools, businesses and other enterprise clients. 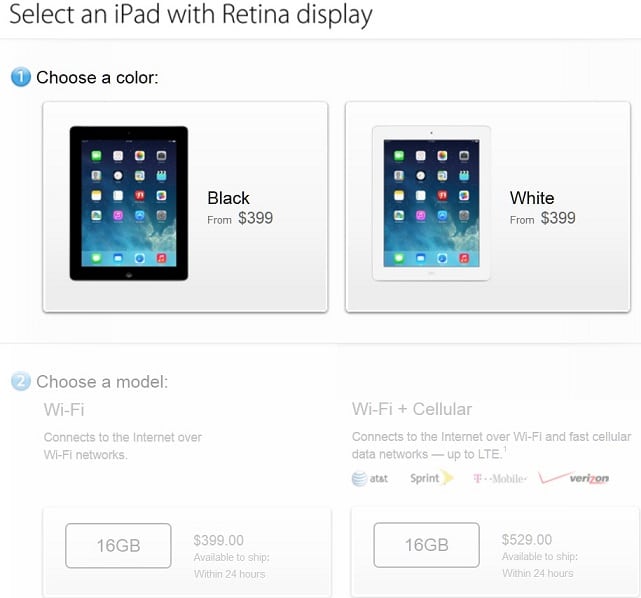 But the demand for the iPad 2 has obviously cooled off, since Apple currently sells the iPad Air and iPad Mini 2 line as well as the original iPad Mini; not to mention the many promotions big retailers are running in the United States. So, Cupertino has decided that now is the time to bring back the iPad 4, or iPad with Retina Display, as it is officially called. This means that at the moment there is only a single iPad officially on sale which lacks the Retina panel – the original iPad Mini.

The fourth-generation iPad is currently being sold for a starting price of $399 for the WiFi only version and $529 for the WiFi+Celullar version. As we can see, only the 16 GB version has been put on sale. The departure of the iPad 2 also marks the last product where Apple has used it last-generation 30-pin adapter as all current iOS devices come with the newer Lightning connector.

Was this article helpful?
YesNo
TechPP is supported by our audience. We may earn affiliate commissions from buying links on this site.
Read Next
With Football Manager 2023 Touch, Apple Arcade finally has its “killer ...
#apple #ipad