11 Impressive Music Gadgets to Get Your Tune On

Since  music was invented in Africa and until these days, we started to see it as more of a part of our life. We can’t live without it, can’t imagine our culture without it and most probably can’t think of a party with no music. For some, there is no such thing as a day with music, either. And for those, inventors from all over the world came up with music gadgets – the best acquisition to have if you love music and the most inspired gift to offer to a music fanatic.

Whether it’s classical, pop, electronic or rap, the most impressive music gadgets in the world feature great advances in technology that allow them to fit any music taste. With that in mind and knowing how hard is to pick from the variety of gadgets available on the market, we gathered 11 of the most interesting ones for you in this article. 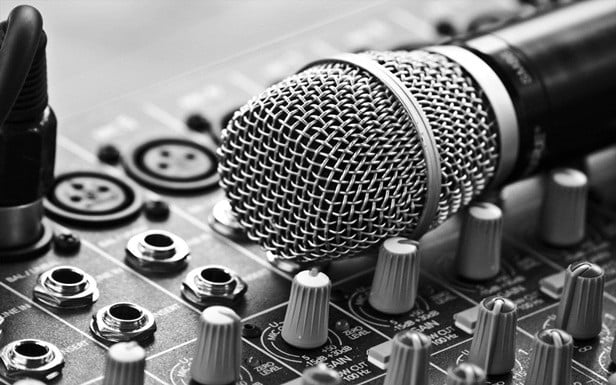 Mogees is one of the newest music gadgets, invented by Bruno Zamborlin in the UK. Thanks to a campaign he started on KickStarter, the device is now available to customers, being a famous device that turns any vibration or movement into electrical signals.

It consists of a mobile application and a microphone that detects and analyzes all vibrations that people generate when interacting with one surface or another. It can be used on glass, wood, metal or any other surface you’d like to try it on. To take advantage of it, all you have to do it find a place you’d like to test, stick the device on, plug it in and start tapping the surface to see what it sounds like.

Whether you’re a music lover who simply wants to breathe the musical life into all objects around you, or you are a professional planning to discover new musical instruments you could build, enhance a live performance or just learn more about music, Mogees has a lot to offer.

The application that comes with it allows you to change the volume and level of sensitivity, create songs based on the sounds, adapt them to popular songs, save them, change the music style, use them later on or transfer them to an external device. All this with just a few clicks. 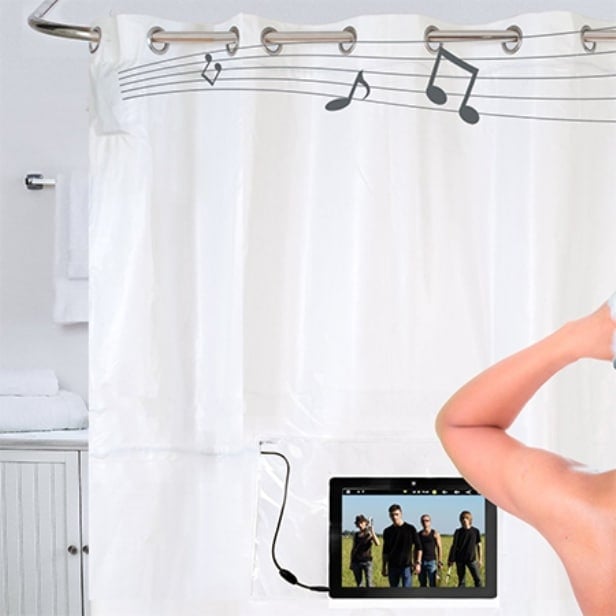 This one is the most unique shower curtain you’ve ever heard of – it has a built-in speaker system that’s waterproof and allows you to listen to music while taking a shower. The Shower Tunes liner or curtain provides surround sound and doesn’t just play the music, but it also gives access to videos.

And Shower Tunes is more modern than ever – it allows you to surf the internet, choose the music you want to play and create your own playlists, watch a TV show while bathing or even check social media and make phone calls. To use it, all you have to do is zip your phone, tablet or MP3 player into the waterproof exterior of the curtain, plug it in and turn the speaker on. With the device requiring three batteries, you can now see and control any audio device while in the shower. 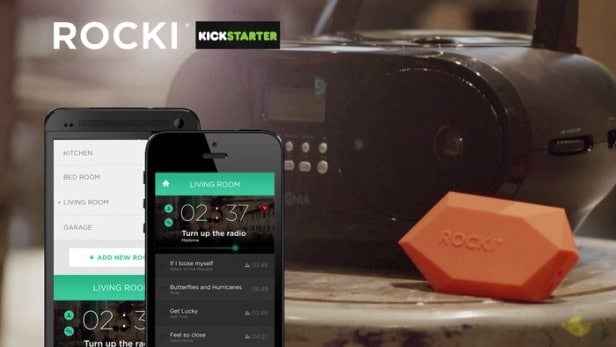 Being a tiny device that can be attached to any speaker with an audio input, Rocki helps you free the music coming from you iPhone, tablet or laptop. The connection is done wirelessly, so you simply connect an external device to Rocki through WiFi and listen to your music anywhere, at any time.

The device comes with an application that anyone can install on their phone and get social – you can share your music with others and organizing a party is a lot easier. All you have to do is ask your friends to install the Rocki application and connect their device to your Rocki, then you can play their music on your little gadget.

If you’re a guitarist you definitely encountered this situation at least a few times – that one where you forgot your guitar pick and just can’t find anything to replace it with. That’s where DIY Guitar Pick Punch comes it, transforming basically anything into a guitar pick.

To design your own pick quickly, all you have to do is to insert the desired material into the device looking like a stapler and squeeze it until it’s done. You can use plastic, expired credit cards or any other cards, such as grocery cards and so on – it works on mostly anything! 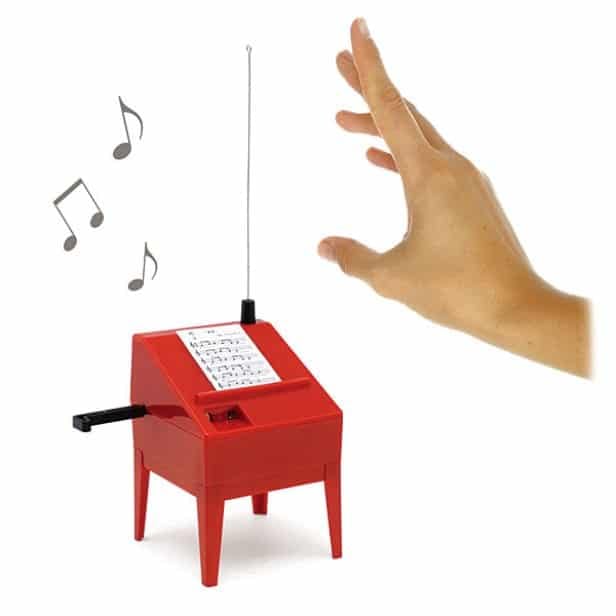 Some are already experts playing their instruments all over the world, as the ones needing a guitar pick, but some others are beginners trying to learn how to play a new instrument. If that instrument is a Theremin, then this kit might be just for you.

The entry-level Theremin Kit is easy to assemble and helps you make music. Being a totally Japanese invention, the device has two volume levels and needs four batteries to work. All you have to do is assemble it and get started, following the instructions. 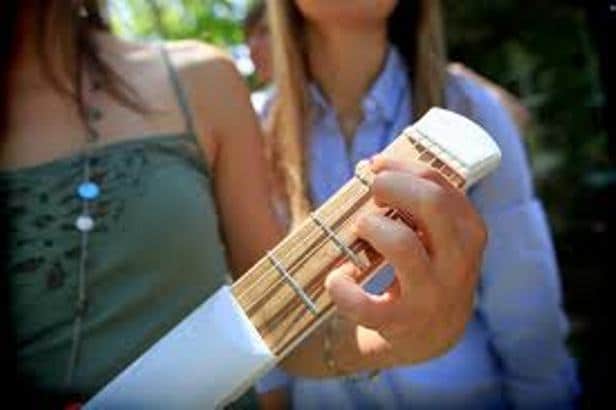 Getting back to guitar players, we know that playing music well requires a lot of practice and the more you practice, the more you know and, the better you are. But caring your guitar around wherever you go is difficult, so having a portable version of it might be a solution.

PocketString Portable Guitar is a practice tool that has only 8” x 2” x 1” when closed and 13.25” x 2” x 1” once opened. It comes with real strings and frets that can be adjusted and replaced, and there’s no need to disassemble and assemble it every time you want to use the device. 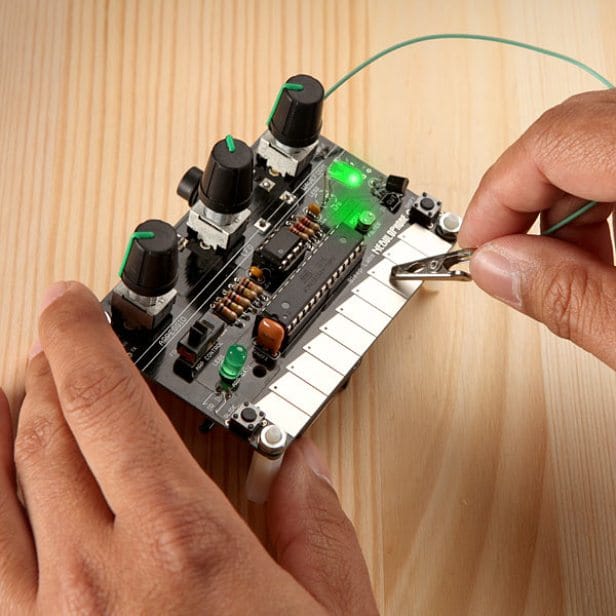 Not everybody is a fan of classical music, playing guitars, pianos, theremins and so on. For those of you who love electronic music, this little synthesizer is a great gadget to have, as it helps you make music anywhere, easily.

The device comes with a stylus that you’ll be using to play a note on the gadget that has to be assembled first. The Nebulophone has many buttons and keys, but comes with instructions that help anyone get used to the keyboard, portamento and arpeggiation adjusters. 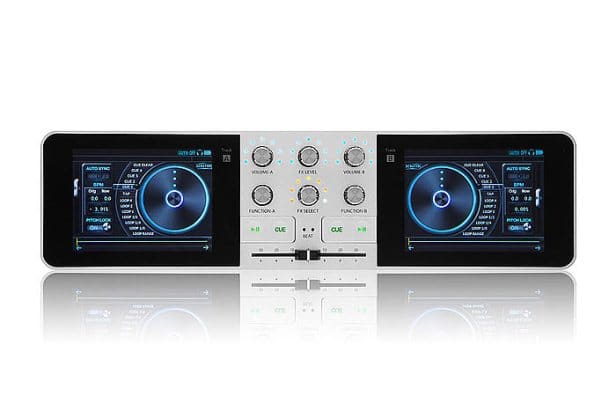 Speaking of electronic music and especially of making and recording your own music, Monster has a portable device that allows you to produce and record digital music, as well as play it at any events. Be it a party at a friend’s place or an event at the club you’re a DJ at, Monster-Go-Dj is a friendly gadget for electronic music lovers.

With a few buttons to adjust the volume and the FX level, while you’re switching between the various programs available, the device is easy to use and comes with a guide that takes you through all the necessary steps. 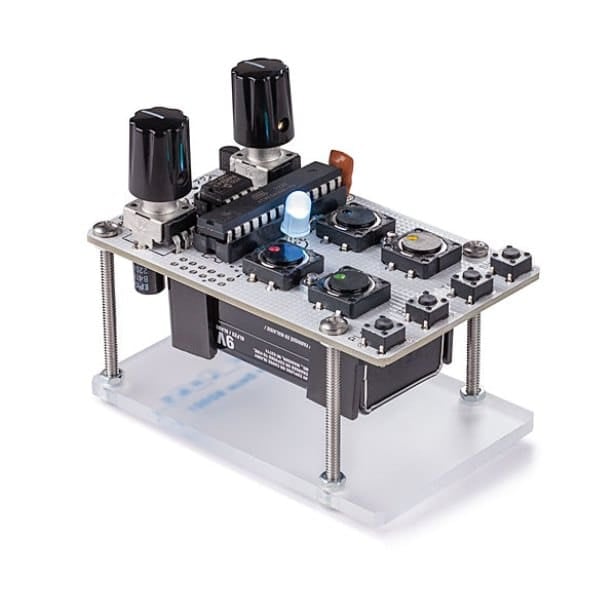 Going back to instruments, but still moving on from classic music, we’re going to address those of you who love to play the drums. The Bleep Drum kit is a really easy gadget to put together, coming with four pads that are the main sounds. Two of them have pitch control, and you can record the patterns by simply playing them.

Bleep Drum is a drum kit that comes with instructions and teaches you how to switch between the four selectable sequences, adjust the mode and record your music. The only downside of the little gadget is it doesn’t come with speakers, so you’ll need to plug in your own. 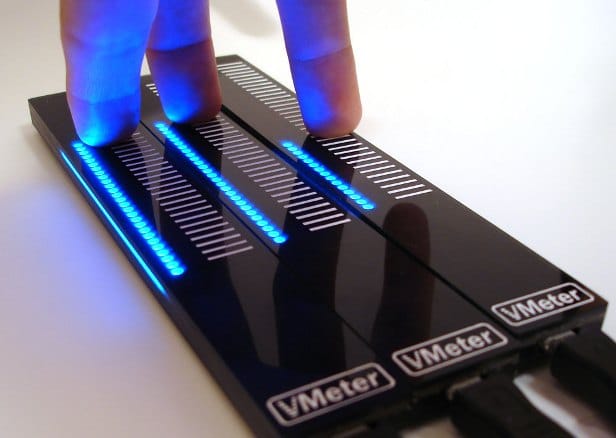 Electronic music lovers seem to be pretty lucky in terms of musical gadgets available for them. But the USB Midi touch slip doesn’t just help you make electronic music easily, but it also adjust to your busy schedule. Knowing you’re always on the go and it’s hard to play and edit your music while you’re having lunch at Starbucks, VMeter provides you with the necessary equipment – all in the form of a little device.

The gadget has just 6.65’ length and 0.94’ width and can be used on anything from a volume control to a robotics controller or a system monitor. Being fully configurable, the device comes with instructions, but requires a lot of creativity and some programming skills in order to fully take advantage of it. 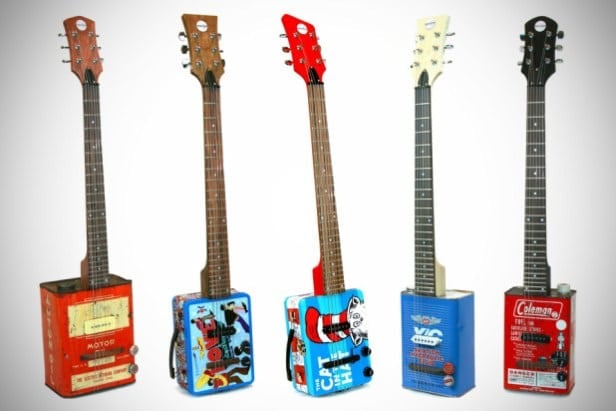 For most of us, music is a mix of science and art – some love the art side more, some the science part, but they all love music. We focused a lot on science when we presented you with some of the most impressive gadgets in the music world, but because art is about feeling and music is a type of art, let’s take a look at these vintage guitars – Bohemian’s Electric Guitars.

These guitars not only sound fantastic, but also catch your eye – they’re made from oil cans and vintage metal lunchboxes that remind us of the old times. Coming from a small company called Bohemian, founded by two brothers who grew up in South Africa, these gadgets definitely have something special in their sound, feel and look.

Spotify Local Files: How to Add Your Local Music From PC/Mac
Read Next

3 Free Ways to Transfer Playlists Between Spotify, Apple…
How to Clean & Tune Up Your Mac with Cleaner One Pro
Boult Audio AirBass Propods Review: impressive battery and…
How to set up your HONOR 9A and HONOR 9S and get your…
Spotify Local Files: How to Add Your Local Music From PC/Mac
How to Get Spatial Audio on your AirPods Pro