The world around us is getting smarter by the day. Our TV sets got smarter, so did our mobile handsets, even the refrigerator learned several new things. Wouldn’t it be great if someday our age-old padlocks got smarter as well? A company is trying to make that happen with its Bluetooth-enabled padlock, called Noke. It is off to a good start, and needs your help to become mainstream. 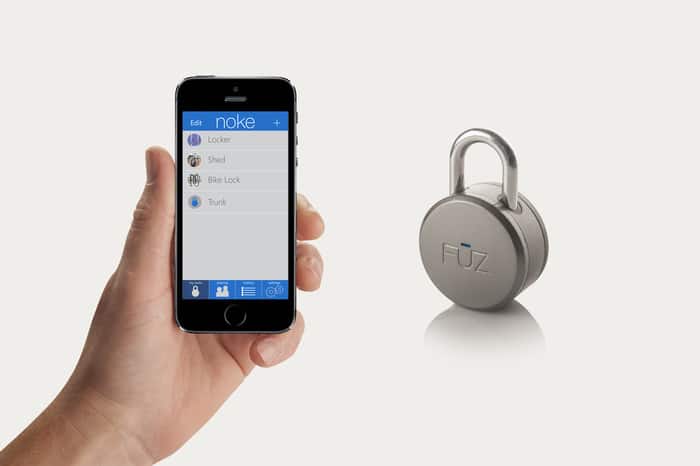 Noke is a Bluetooth enabled padlock that lets you control it through apps available for Android and iOS. Once you have downloaded the app, it automatically finds and pairs to your smartphone.

By default, the lock is at idle, protecting your possessions. However, as soon as you press the skank, it wakes up and hooks up with the paired device. To make things even more convenient, Noke automatically unlocks itself if the paired device is at within 10 feet distance.

What if you wanted to share a spare key with someone?

With Noke that is possible too. As the creator explains, one can share access with others easily within the app. Of course you can remove these people, should it required. To make things even more convenient, Noke lets you choose between permanent, one-time, or custom settings.

What if the battery of your phone or Noke is dead?

One of the issues you could run into is out-of-juice battery. If your phone is short on battery, Noke features a “Quick-Click” technology, that lets you access the Noke with a custom access code. It’s pretty intuitive, watch the gif image.

But what if Noke’s battery is dead? In such case, you can remove the back of Noke by inserting a pin, and swap the battery. Once that has been taken care of, the device will get back to its normal functioning.

Noke looks much like any other lock, just that it has a little sensor right on the middle of the front face. Wondering how strong it is? Noke is built using steel and boron, and the creator promises that it will withstand any environment — that includes the ones that love showering water.

The company is offering the padlocks starting at $59, but as you buy more locks, the price may seem a bit lower. Additionally, there are several accessories like chains among other items that can be used to, say lock your bicycle etc.

Noke is compatible with Bluetooth 4.0 hardware laced devices. So any device say iPhone 4s, iPhone Touch 5G, iPad 3G, iPad minis or their newer variants will work fine. As for Android, most of the smartphones running JellyBean (4.3) and KitKat (4.4) should be able to run it. Even if your device is not on the latest operating system, there is a good chance it supports Bluetooth 4.0.

The project is up on Kickstarter, craving for backers. The product is touted for February 2015 shipping. The FŪZ Designs, the folks that are developing it have pledged for $100,000 goal, and at the time of writing, the project had found 220 backers, with $23,180 money raised with 30 days still left to go. After quite a long time we have spotted such a handy project. Let’s make it happen! Click on the via link below to show your support or gather more information.

TechPP is supported by our audience. We may earn affiliate commissions from buying links on this site.
Read Next
Wear Graphene Gamma: One Jacket to Rule Them All
#Kickstarter