Swing Copters, the Flappy Bird Successor is Now Available for iOS and Android; is Even More Irritating

Most of us were late to the party when Flappy Bird became a rage few months back. Here is a chance to get on early to the mania sweeping the world. The successor to the hugely popular Flappy Bird is here. Named Swing Copters, the game is very similar to its predecessor, but sadly looks even more tough and irritating to play. The app is available for $1.29 on iOS and free (with ads) on Android. 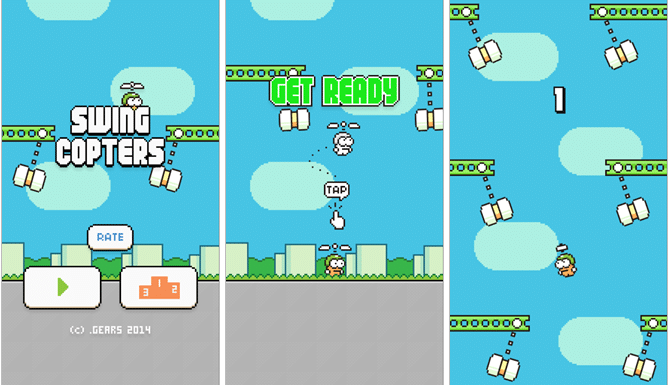 Dong Nguyen, the developer of Flappy Bird had taken down the app mysteriously from both the iOS App Store and Google Play Store, and later revealed that the reason behind his decision was that the game was getting extremely addictive. Well, his newest creation isn’t much different. When we tried it for a brief time, we could hardly get scoring.

Instead of an ugly bird, we now have an incredibly sensitive copter. He has a tough time controlling himself and you need to tap hard to propel him upwards while he tries to avoid the obstacles coming his way. A slight delay in tapping ensures that the copter swings violently crashing on to the obstacle. Honestly, we took eight tries to open our score and has since not managed to go past it. Surprisingly, the highest score as of writing this article is 45. FORTY FIVE!

Swing Copters is even harder and more frustrating than the Flappy Bird, so much so that I feel people won’t be as kind as they were with the Flappy Bird. The very unforgiving gameplay is surely addictive, but restlessly tapping the screen to stay afloat might be just a little too much for many. Having seen the success enjoyed by Flappy Bird, we won’t be betting against the Swing Copters, so wait out for a detailed review coming your way soon.

As of now, the Google Play Store is filled with a lot of knock offs with exactly same names or a slightly different one. Good luck finding the real Swing Copters game. We have you covered though, check out the direct links right below.

[First cut] Oppo Reno 2: More step-up than successor… in…
Even this 5-year-old iPhone will get updated to iOS 14
Android Auto for Phone Screens is now Available for Download…
Poco F1 successor might be launching on March 30, possibly…
Qualcomm announces Snapdragon 870 5G mobile platform as a…
The OnePlus Nord CE is NOT really the successor of the Nord!