Like many out there, when I saw the BlackBerry Passport for the first time, I said – ‘yuck, what an ugly phone’. But after watching today’s launch event, I can say that it’s the first time when I am looking at a device that I’d love to have. And it feels like we’ve been a little unfair with BlackBerry so perhaps it’s time to take a good look at this smartphone and not make fun of it. 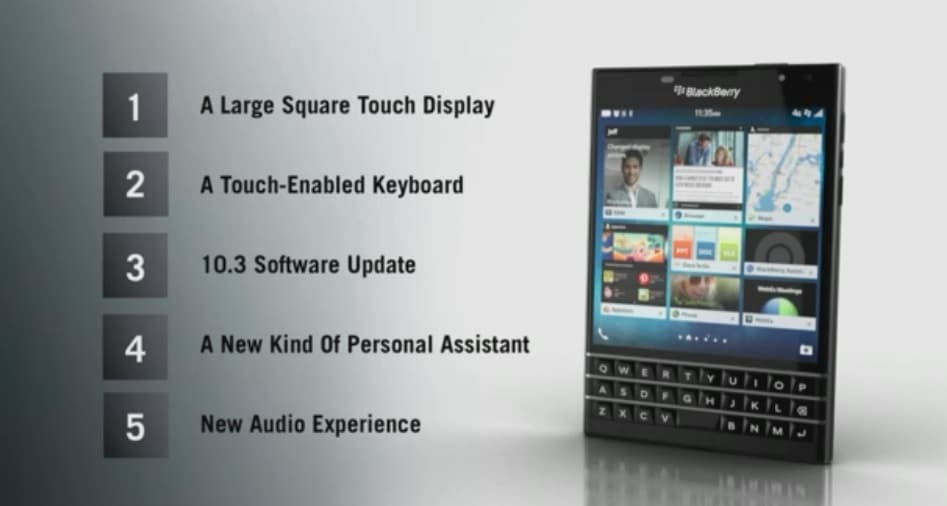 The BlackBerry Passport comes with a number of improvements and strong points, and as you can see in the above screenshots, these are – large square touch display that allows for more productivity, a one of its kind touch-enabled keyboard, the latest 10.3 software update, a new personal assistant and an improved audio experience.

First of all, the large high-resolution square screen might seem a little unusual, but it is actually much more useful and productive. During the entire event, BlackBerry has targeted business users and said that they will be able to get more done with this unusual screen profile. And by the looks of it, they might be right.

Have a look at these screenshots that show how is content displayed on the BlackBerry Passport versus the iPhone 6 or the Samsung Galaxy S5:

We can see that BlackBerry Passport’s 4.5” square screen with a 1:1 aspect ratio will help you see more of your spreadsheet, financial quotes, emails and what not. But that’s not all – it comes with an amazing 1440×1440 pixel resolution (453 dpi) and latest Corning Gorilla Glass 3 for added strength.

The BlackBerry Passport’ comes with a brand new keyboard that is touted as revolutionary by the company. It lets you perform many touch functions directly on the keyboard, such as scrolling web pages, flick to type or slide along the keys to move the cursor. This might seem like a small feature, but it leaves the full screen space for viewing. > 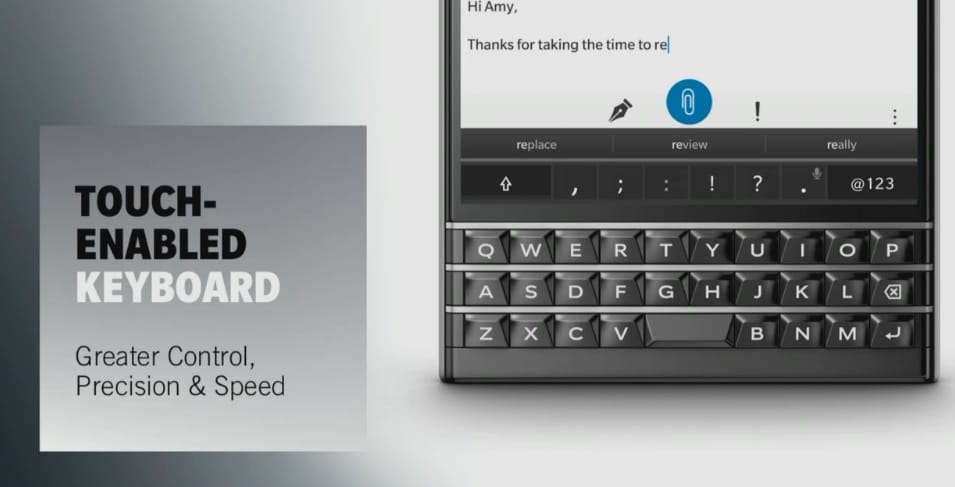 For example, when opening a document on your iPhone, almost 2/3 of your screen will be occupied by the virtual keyboard. This is one of my favorite features about the BlackBerry Passport, as I am always annoyed by virtual keyboards. Here are all the features of this really cool keyboard: 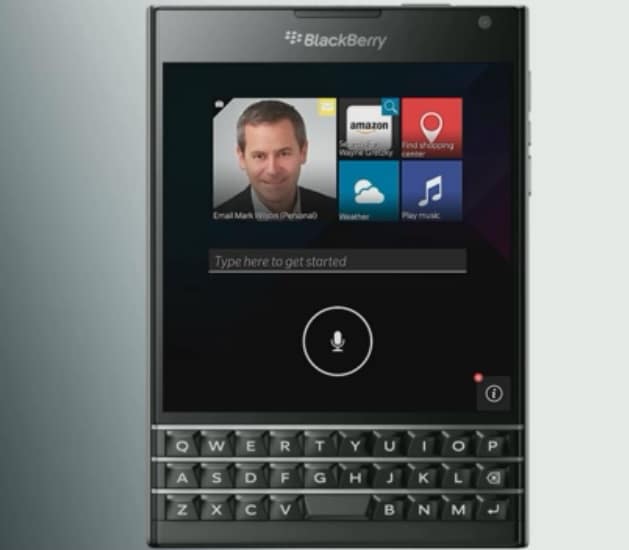 The BlackBerry Passport comes preloaded with the new BlackBerry 10.3 operating system, sporting such new features such as BlackBerry Assistant, BlackBerry Blend and the Amazon Appstore. It also comes with updated icons and an instant action bar where users can check most commonly accessed functions.

The BlackBerry Assistant also seems to be pretty smart, as it can let you use it both verbally and it written form, for those moments when you can’t speak to your smartphone.  Also, if you’re in the car and connected via Bluetooth, it will reply verbally as it knows you can’t look at the screen.

You can manage both work and personal email, contacts and calendars which is something that you might not be able to do on non-BlackBerry devices as work data is stored within a secure work data container. Of course, it comes with the usual features such as checking the weather or your calendar and booking meetings. 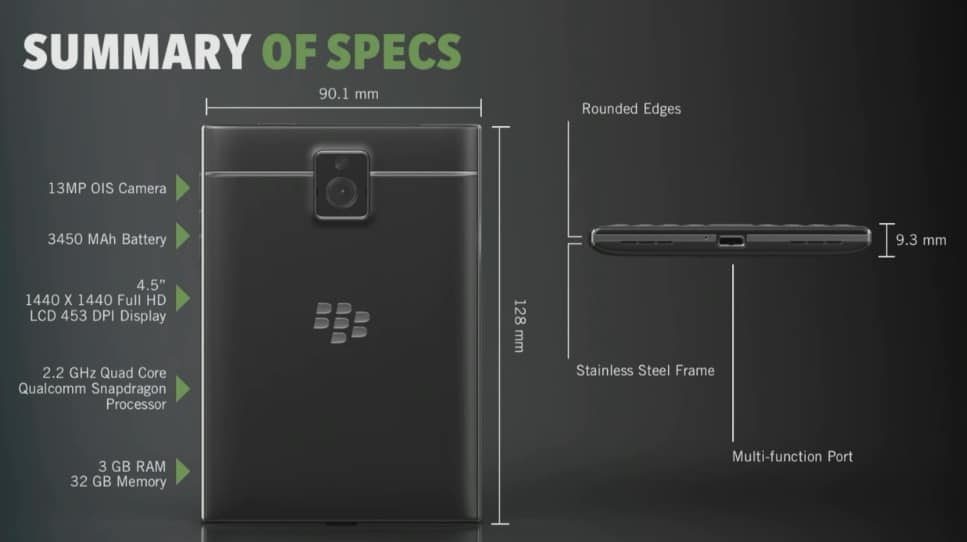 The smartphone comes with a 3450 mAh battery which is the largest among the top selling smartphones and phablets. It’s said to provide up to 30 hours of mixed use. As for the specs that everybody is so concerned about these days, there isn’t really something that you could not be happy about. Here they are:

The smartphone isn’t exactly slim, but you can’t say it’s thick either at 9.3mm. Perhaps the physical keyboard, the huge battery and the 13MP camera were the reasons for the increased thickness. It comes with a stainless steel frame and rounded edges. It seems like a really robust device, but we’ll be able to say that for sure when we get it for our own review. 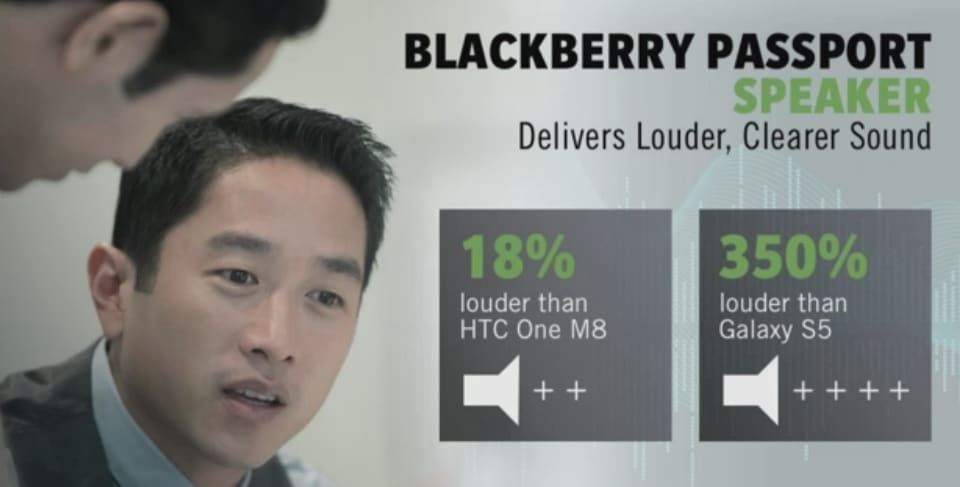 THe BlackBerry Passport gets released with some powerful speakers and a quad microphone system that delivers a high-quality listening experience. The new BlackBerry Natural Sound Technology is built in to adapt Wi-Fi and cellular call sound ‘depending upon phone position and background noise, automatically adjusting volume so you don’t have to’.

So, this means that this is a great device for multimedia purposes but also for great call quality. This is one feature that has been overlooked by many OEMs, even though professionals and regular consumers have long been complaining.

A great device at a great price makes for a comeback

We haven’t had the chance to test the new BlackBerry Passport yet, but once we do, we’ll be able

to share our impressions of its real performance. But, as it stands right now, this is actually a pretty nice device. Considering that it is available unlocked at a price of $599, I think that BlackBerry has managed to finally make a device that stands out.

It comes with a new design that will prove hard to sell to regular consumers, but will be appreciated by professionals and tech-savvy persons. It has an innovative physical keyboard that leaves more touch screen free, allowing you to see more from the first time. There’s a smart assistant, improved audio and overall great build quality.

This is a comeback.

Was this article helpful?
YesNo
TechPP is supported by our audience. We may earn affiliate commissions from buying links on this site.
Read Next
Blackberry Key2 LE with Snapdragon 636 SoC and Physical Keyboard Launched for...
#Blackberry