Nokia’s much-awaited HERE maps and navigation app has finally been launched for Android devices. However, at the moment, the beta version is only available in the Samsung Galaxy Apps store, so you are in luck only if you own a Samsung’s Galaxy-branded Android smartphone. 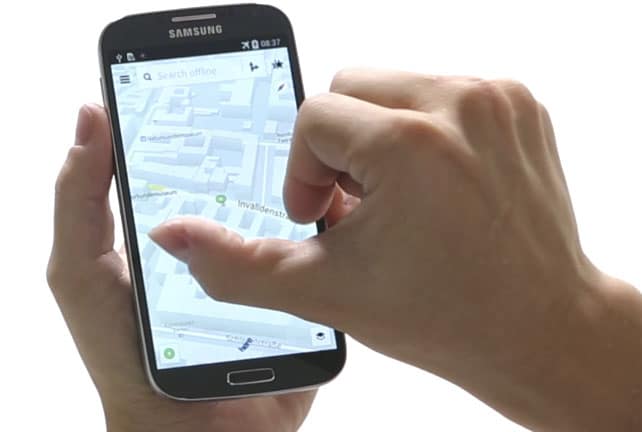 But rest assured, it won’t remain like that for ever, as Nokia has confirmed that it’ll be launching its HERE app for iOS and Android devices before the end of the year, but an exact release date hasn’t been provided. It’s a great deal for Samsung as it looks to cut on its dependency on Google’s services.

One of the most appreciated features of the Nokia HERE app is the ability to download, for free, large parts of its digital maps for offline use. Google Maps also supports offline maps, but these are usually limited to smaller areas or not available at all. Therefore, Nokia, or to be more precise, what’s left of the company after Microsoft’s buyout, hopes it can impress users with its mobile mapping solution.

Another feature is that you can use HERE Maps without signing in with your HERE account or Facebook profile. However, by identifying yourself to the application you can build up favourites, collections of places, and have them accessible in the cloud.

HERE Maps also features voice navigation with downloadable HD voice packs, along with directions suited for driving, using public transport, or walking on foot. I have used the app myself on my secondary Windows Phone device and haven’t been let down. Now I’m looking forward to the same performance on Android, as well.

If Tizen does indeed turn out to be a serious initiative for the Korean company, then partnering with Nokia on their HERE maps makes a lot of sense. Have a look at the video from below for a brief overview on how offline maps will work on the new app.

Update: As expected, the Nokia Here Maps APK has leaked. One can download it from here. It’s supposedly working on most Android smartphones.

TechPP is supported by our audience. We may earn affiliate commissions from buying links on this site.
Read Next
How to Check and Recover Clipboard History on Android
#android #maps #nokia #samsung