#AndroidLollipop rollout has started and will soon be available on most #Nexus devices. Dessert is served. pic.twitter.com/XVFX2tEbHv

The Android 5.0 update was supposed to roll out earlier this month for Nexus 5, but was delayed apparently due to a WiFi bug. There were also reports that Google wanted Nexus 6 to go on sale before releasing the latest OS update to the older Nexus devices. 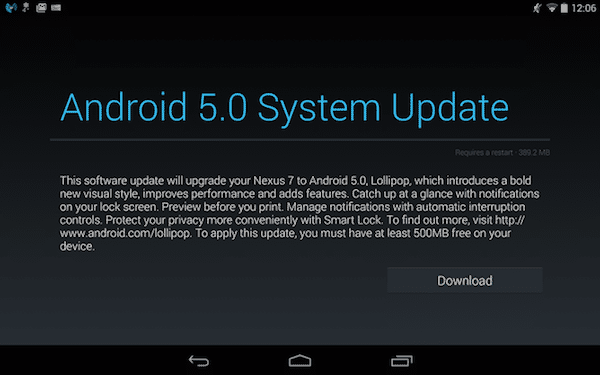 Android 5.0 Lollipop comes with lots of new and interesting features and a complete overhaul of visual design. It comes with what Google calls the ‘material design’ which is a bold, colorful and responsive UI design for consistent, intuitive experiences across all your devices. The notifications have got a makeover as well and are less interrupting than before. Encryption is automatically turned on enhancing the security to a great extent. Sharing of devices between multiple users is now a breeze. The new runtime provides a faster, smoother and more powerful computing experience.

Of course the OTA roll out has just started and will be rolled out in phases. It might take days or weeks for the OTA to arrive to your Nexus device. If you are impatient, you can download the factory images and binaries for the Nexus 5, WiFi variants of both Nexus 7 2012 and Nexus 7 2013 and the Nexus 10.

You’ll need to have an unlocked bootloader or be willing to use ADB to apply the update manually. If you’re on a developer preview or a custom ROM, you need to get back to completely stock Android to get this update. This will wipe your device clean, so remember to backup your device before flashing.

TechPP is supported by our audience. We may earn affiliate commissions from buying links on this site.
Read Next
How to Fix Google Chrome Translate Not Working
#Android 5.0 #google #Lollipop #nexus