SnoopSnitch is a brand new app for Android users developed by the folks over at Security Research Labs. Its purpose is to bring more control in the hands of consumers by collecting and analyzing mobile radio data. The new app warns about Android users about such threats like fake base stations (IMSI catchers), user tracking, and SS7 attacks, but at the moment it will work only on rooted devices with a Qualcomm chip isnide. 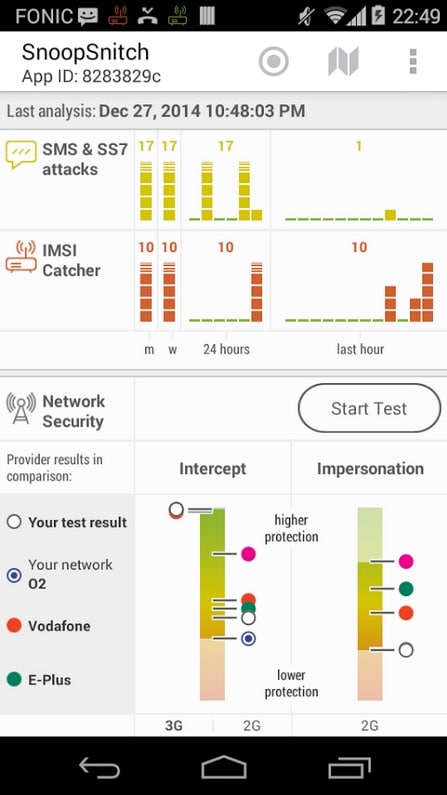 phone traffic and tracking the movement of smartphone users. The guys over at Techopedia have a slightly more detailed explanation:

To prevent the subscriber from being identified and tracked by eavesdroppers on a radio interface, the IMSI is rarely transmitted. A randomly generated temporary mobile subscriber identity (TMSI) is sent instead of the IMSI, to ensure that the identity of the mobile subscriber remains confidential and eliminate the need to transfer it in an undeciphered fashion over radio links.

Security experts have discovered security flaws that could allow hackers to listen to private calls and read text messages by using IMSI catchers or ‘stingrays’. So if you are concerned about these things, the new SnoopSnitch can detect IMSI catchers and warn smartphone users if their devices are giving up their personal information. Besides intercepting traffic and tracking the movement, hackers can use this loophole to even manipulate the device remotely.

The app uses data contributed by other users, if you will upload your measurement results or security events, you will help improve the data base and support future research, informs Security Research Labs. While SnoopSnitch will prove to be especially useful in business environments, as regular consumers become more wary of their privacy, it will definitely find adoption among them, as well.

Was this article helpful?
YesNo
TechPP is supported by our audience. We may earn affiliate commissions from buying links on this site.
Read Next
8 Best Keyboard Apps for Android [2022] – Memes, Stickers and More
#android apps