The more things change, the more they stay.. well, the same. You would be forgiven for thinking that when you clap eyes on the BlackBerry Classic. For after almost two years of going with a new look and concept, BlackBerry has returned to its roots – oh well, sort of anyway – with the Classic. No, contrary to some rumours, the Canadian company did not give up on QWERTY keyboards when it placed its eggs in the BB 10 OS basket, but the QWERTY laden BB 10 devices it DID release subsequently – the Q10, the Q5 and the Passport – were not like their predecessors. Yes, you did have all the letters in the alphabet below the display, each with a key of its own, but missing were the touch pad, the menu key (with the BB logo) and the call receive and end buttons. BlackBerry assumed that users would not mind heading to the touchscreen for these functions, while made these devices a mix of touch and type. 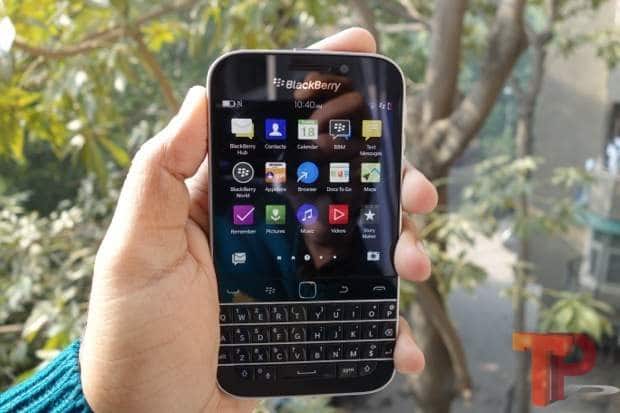 And if you are a BlackBerry follower, the first thing that will strike you about the device is not the QWERTY and touchscreen combo, but that single row of keys right below the 3.5 inch display which have a touchpad, a call receive and call end button, and the BB icon button for menu. That apart, this is the classic BlackBerry key layout, with three rows of alphabets and one for shortcuts and the spacebar. There are metallic lines running between rows of the keyboard and each key has that little wedge that was so loved in the Bold series of devices (the Classic is incidentally being called the spiritual successor of the Bold 9900. Yes, we weep for the poor orphaned Q10, but never mind!), and also a solid metallic frame around the device itself, with the volume and voice command buttons on the right, the display/power key on top, the SIM and SD card try on the left, and the micro USB port and dual speaker grille on the base. Flip it around and you will see a slightly grainy, dotted finish that we saw in the Z10. It is not as classy as the smooth, subtle textures on the Q10 but will not pick up any stains or scratches and well, has a shine that will turn heads. Talking of head turners, the shining BB logo in steel in the centre on the back will do so as well, and ah, was that a sentimental tear we felt in our eyes when we saw the word “Classic” next to the 8.0-megapixel camera and flash on the back? While on the back, this does seem a good time to point out that the device is unibody, so forget about taking off the back cover and pulling out the battery – the SIM card and memory card trays pop out from the side here!

Pick up the phone and you will notice its weight. Yes, the Passport was heavier, but it was a much bigger device. For a relatively ‘normal’ sized phone (in these days of palm stretchers), the Classic is pretty hefty at 177 grammes – just for the record, the much bigger Passport is 194 grammes and the Q10 was 139 grammes. And it is not exactly slim either at 10.2 mm. But in best BB tradition, it will slot into your hand very easily indeed, and well, it does well very reassuringly solid. No, we do not make a habit of bouncing phones off the ground, but the Classic looks as if the ground would have more to fear from contact with it than the device would. For the record, it is much taller than the Q10 (131 mm to 119.6 mm) and wider too (72.4 mm to 66.8 mm), but then it does have a bigger display (3.5 inches to 3.1 inches on the Q10) and that extra row of keys.

The hardware is not something that will make the geek benches roar in approval – the display is a 720 x 720 pixels affair as on the Q10, and the processor is a dual core Qualcomm Snapdragon MSM 8960 with 2 GB RAM and 16 GB storage, expandable to 128 GB using a memory card. The camera on the back is 8.0-megapixel and if you stare hard enough at the front, you will notice the 2.0-megapixel camera next to the speaker grille above the display. Connectivity options include LTE, Wi-Fi, NFC, Bluetooth and GPS. And running on top of this is BlackBerry 10.3.1, which comes with support for Android apps and the Amazon Appstore preinstalled. All of which seems rather modest when you consider that in terms of sheer hardware, the likes of the Vibe Z2 Pro or OnePlus One would deliver much more at an almost similar or much lower price – the Classic comes with a price tag of Rs 31,990 in India.

But then the Classic is not about hardware, but the whole “real typing” and productivity experience. The company says that the device has been designed in such a way that you can actually use it without having to touch the touchscreen even once. And well, features like BlackBerry Blend (which lets you switch from phone to tablet to notebook seamlessly, accessing content and messages without any hassle) and BlackBerry Hub (while combines mails, messaging and social networks in one place) are very much there, as is the promise of excellent battery life.

All of which, BlackBerry reckons, will speak to the hearts of the hardcore BlackBerry fans, especially the ones still nursing their Bold 9900 devices, hoping for a return to the BlackBerry of old. Well, they have their wish in terms of design. But will the Classic experience manage to mix the best of the old and the new? That is the challenge that the BlackBerry Classic faces. And which we will discuss in our review in the coming days. Stay tuned.

[First cut] Narzo 30A: Needed to be more basic than brave?
Read Next