Samsung Loses Top Spot to Micromax as No.1 Smartphone Maker in India

There seems to be no end to Samsung’s woes with their dwindling fortunes in the smartphone markets across the world. After losing to Xiaomi in Chinese smartphone market late last year and global top spot to Apple last month, the Korean giant has lost the top spot in India as well. Micromax, the local OEM biggie has ousted Samsung to be the No.1 smartphone maker in India for the first time ever. 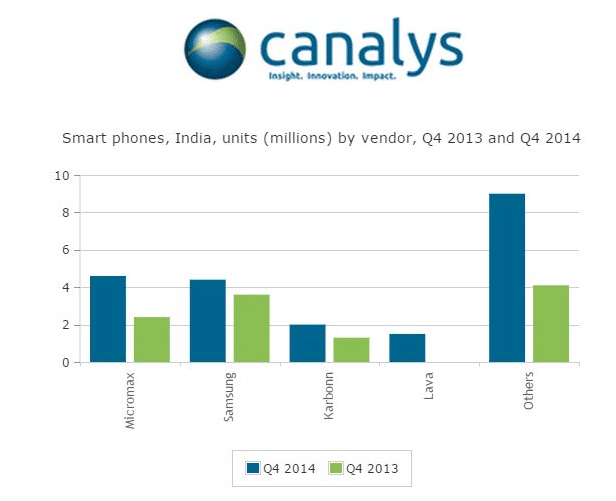 As per the report coming out from the research firm, Canalys, Micromax now has 22% share of the total smartphone market in India, ahead of Samsung at 20%. Samsung has been at the helm of affairs in India for several quarters. As per Canalys,

This incredible performance is partly due to Micromax’s continuing appeal to mobile phone users upgrading to smartphones. Its flagship line of products has also very effectively targeted the US$150 to US$200 (Rs 9,000 to Rs 12,000) segment, with products such as the Canvas Nitro and Canvas Hue.

Following Micromax and Samsung are the other two local OEMs, Karbonn and Lava in third and fourth positions respectively. Canalys feels that catering to local market preferences will become increasingly important and Micromax has been quicker than its competitors to improve the appeal of devices with stuff like local language support in its Unite series of smartphones.

India continues to be the fastest growing smartphone market in the world growing by over 90% year-on-year, with 21.6 million units shipping in Q4 2014. Considering the difference between Samsung and Micromax is a mere 2%, it’ll be interesting to see if Samsung can crawl back to the top spot in the coming quarters of 2015.

Update: Samsung just sent out a press release claiming they are still No.1 smartphone maker in India based on the data released by the research firm, Gfk. Thing to note here is that Gfk data is based on actual sales and not shipments.

Also, Gfk’s data is based on actual retail sales in 50,000-plus population cities, so there are bound to be differences. Let’s wait for IDC to come up with their research and data, and see if we can conclude this any better.