It’s no secret that Microsoft’s Windows Phone mobile operating system has an “app-gap” problem. The stark difference in the app count in Windows Phone Store when compared to Android’s Google Play, and Apple’s App Store is so wide that even the ‘universal app’ support — which the Redmond-based company announced at last year’s Build conference — has been unable to fill it. But it seems the company is finally ready to tread on a controversial path to solve this age-old problem. 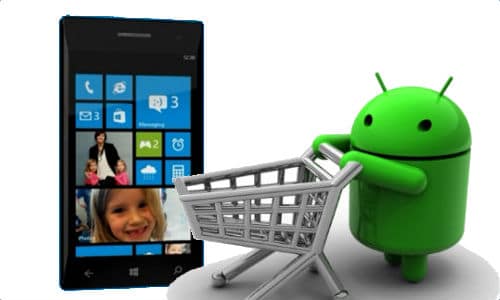 As a long time Microsoft beat journalist Paul Thurrott reports, the company will be announcing support for Android apps on Windows Phone platform sometime later this week — I would put my money on the company’s own developer Build 2015 conference which commences later today. If true, this will enable Windows Phone users to try out most of their favorite Android apps — not so sure about Google Mobile Services such as Gmail etc yet — on their Windows-powered smartphone.

As crazy as this may sound — and we understand that it will disappoint many Windows enthusiasts — this isn’t the first time we’ve heard of such possibility. As ZDNet’s Mary Jo Foley reported last year, Microsoft has had been contemplating a “Plan B” which facilitates support for Android apps on Windows 10 for phones-powered devices. She had noted that the company was hoping that it wouldn’t have to use it, but if nothing works out, this was supposed to be company’s final attempt to save Windows Phone.

Microsoft’s affair with Android goes a long way back. Besides making billions off licensing more than 200 patents that are required to build an Android phone, Nokia had launched Android-powered X lineup last year that runs on Android. The company — much like any company out there — is more than welcome to use Google’s open source Android project (AOSP) which ships without Google Mobile Services.

With the ability to run Android apps on Windows Phone, millions of users will be able to try out the newest apps as well as several popular apps that are otherwise out of their reach. But we wonder how many of them will welcome this move. By introducing any similar support, Microsoft is essentially putting in its paper. The company is giving up on the idea that Windows Phone in its current state is capable of competing with rival platforms.

As we noted earlier, this is also likely to flame up its loyal user base. As Rudy Huyn, one of the top devoted app developers of Windows Phone had pointed out earlier this year, if Microsoft brings this functionality, it will be very hard for it to lure customers. “If a user can [have a] choice between a real Android phone and a phone emulating Android apps… the choice will be very simple,” he had said. “If Microsoft brings Android apps on Windows devices, nobody (except some fans) will create native apps anymore, they will only create Android apps. Consequence: bad user experience, bad performance, etc… clearly not a good idea.”

We’ll probably get a confirmation on this by the end of the day. Microsoft is hosting its developer Build conference tonight where it will be discussing the next big changes coming to Windows mobile and desktop platforms. Many believe that the company won’t get any more chances to save its Windows phone platform if it fails to communicate compelling points at this year’s developer conference. Do you think bringing Android apps support to Windows Phone is the right way to go about it? Share your views in the comments section below.

Was this article helpful?
YesNo
TechPP is supported by our audience. We may earn affiliate commissions from buying links on this site.
Read Next
How to Fix Android Wi-Fi Not Turning On
#android #BUILD 2015 #microsoft #windows phone