As you know, Windows Media Center is the default digital video recorder and media player that Microsoft pre-loads in its Windows operating systems. Albeit it lets you do a lot of things and is pretty versatile, Windows users have gradually resorted to the use of similar third-party software, which has made Microsoft decide to offer WMC just as an add-on Windows 8 Pro and Windows 8.1 Pro. 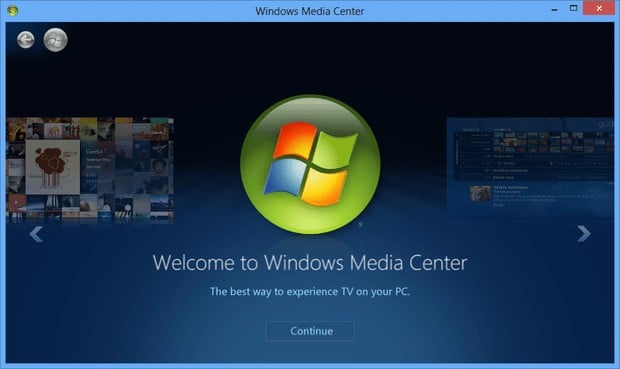 We can confirm that due to decreased usage, Windows Media Center will not be part of Windows 10.

Therefore, you should know that any PC that is upgraded from Windows 7 or Windows 8.1 to Windows 10 will lose the Media Center functionality, and you can’t get it by downgrading, so think twice before making the jump. Gabriel Aul further added, saying a DVD option will be released via future update:

If you have WMC now, we’ll have a DVD option for you in an update later this year… The main scenario people used WMC for was to play DVD. We’ll provide another option for DVD playback in the future

If you really can’t let go of Windows Media Center, then you should stick with Windows 7 or Windows 8.1 with the Media Center Pack add-on as the Media Center will still work on those operating system until 2020 and 2023, respectively.

It’s curious to point out that the most recent of Windows Media Player also dates from 2009, so we’re wondering whether Microsoft plans to ditch that, as well. There have now been almost six years since the last update, so don’t be too surprised if Microsoft decides to remove WMP from Windows 10, as well. However, if it does ditch it, the question is – what will it use instead? Will the newest version of Windows become bereft of a native media player? Microsoft badly needs to address this concern and my best guess is that they’re going to use the revamped Video app for that.

TechPP is supported by our audience. We may earn affiliate commissions from buying links on this site.
Read Next
How to Request Read Receipts in Microsoft Outlook
#microsoft #Windows 10