India has quickly become one of largest and lucrative smartphone markets in the world. Which explains why companies from all across the globe are entering India left and right. Just from China alone we have seen about half a dozen firms land on Indian soil in the last couple of months. Next week will be pretty interesting for smartphone enthusiasts in the country as two more Chinese companies have announced their arrival. 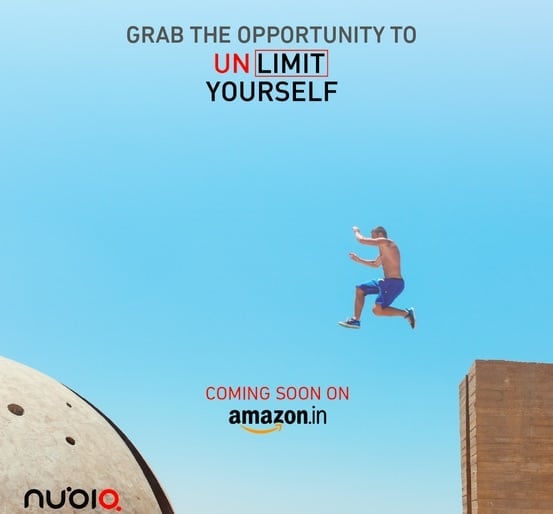 Earlier this week, one of China’s top smartphone vendors Meizu announced that it will be launching a smartphone — presumably its $160 iPhone 5c rip off of the m1 note (that’s how the company likes to name its products, apparently) — in India on May 18. We’re are now learning about another company that plans to debut in the same week.

Nubia, a premium smartphone brand by Chinese electronic conglomerate ZTE will be launching its first phone in the country on May 19. The company announces that it has partnered with Amazon India to give the e-commerce company exclusive rights to sell its smartphones (and maybe other products as well) in the country.

Last week the company began different social media campaigns to spread the word of its imminent arrival in India. On Twitter and Facebook, the company began to ask users rather corny questions like “what’s stopping you from gaining a new perspective?” The company also ran a social media contest with hashtag “unlimityourself.” The company now has a dedicated page on Amazon India portal where it shares even more trite phase: “Now, there is no limit to what you can achieve.”

That said, Nubia recently unveiled several enticing smartphones including the Nubia Z9, Z9 Mini, and Z9 Max in China. All the three smartphones bear a resemblance with the iPhone 5s with almost no bezel across the display. As for the specs, the Nubia Z9 sports a 5.2-inch FHD IPS 2.5D CGS display which has a layer of Corning Gorilla Glass 3 protecting the screen. Inside the handset sits a 64-bit capable Snapdragon 810 chipset with Adreno 430 GPU. As for the RAM, the company is offering users between 3GB and 4GB which comes coupled with 32GB or 64GB of internal storage memory. As for the battery, the phone ships with a 2,900mAh cell.

On the camera side, the smartphone comes with a 16-megapixel sensor from Sony with LED flash and f/2.0 aperture, and an 8-megapixel shooter upfront with 80-degree wide viewing lens. The phone runs on Android 5.0 Lollipop with Nubia 3.0 UI on top of it. On the connectivity front, the dual-SIM capable smartphone supports Wi-Fi, 4G LTE, and Bluetooth 4.1.

The phone comes in two variants: the Classic Edition which picks 3GB RAM and 32GB internal storage combo and costs around $560 (Rs 35,800), and the Elite Edition which flaunts 4GB RAM and 64GB of internal storage and boasts fingerprint sensors. It costs $720 (Rs 46,000). Interestingly, the phone doesn’t go on sale in China until later next week. Does the company plan to debut the same smartphone in India on May 19? Or will be some other phone or a different product altogether? We will know next week.

Was this article helpful?
YesNo
TechPP is supported by our audience. We may earn affiliate commissions from buying links on this site.
Read Next
Meizu 16T with Snapdragon 855 and Triple Rear Cameras Launched in China
#Meizu #Nubia #Nubia India #Nubia Z9 #ZTE Nubia