Apple iPad Gets MultiTasking with iOS 9

At its ongoing developer conference WWDC, Apple unveiled iOS 9, the latest iteration to its mobile operating system. The new update brings with it a number of new features in Siri and Maps, but that’s not all. The company also announced that it is giving iPads users that one feature they have been craving for years: multitasking support. 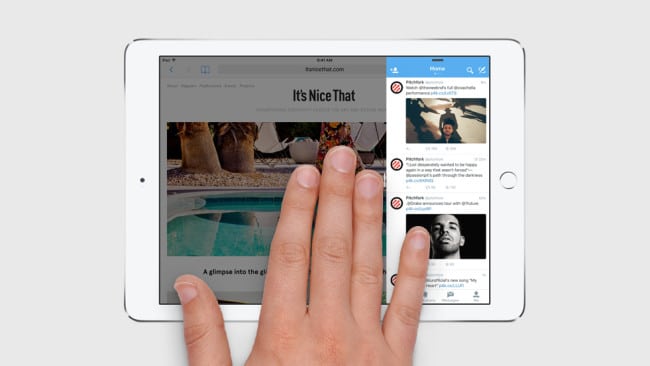 Apple’s Craig Federighi said that “iPad has always supported forms of multitasking.” but for iOS 9 they’re “taking it to a whole new place.” Introducing Slide Over, now users will be able to snap two apps together side-by-side (company is calling it Split View), and work simultaneously on both and even do drag and drop from one app to the other. Users will also be able to resize the windows as they see fit using a slider. There’s also a new app switcher, which will appear when you double tap on the home screen.

The Split View feature will be available in iPad Air 2, whereas Slide Over and Picture-in-Picture ( a feature that lets you use Facetime while also using some other app at the side) will work on iPad Air and up, and Mini 2 and up. The company also announced that unlike iOS 8, which required 4GB free space on devices to glean the over-the-air update, iOS 9 will only ask for 1.4GB of free space.

Among other features, with iOS 9, users will get a power saving mode which will pull switches we users “didn’t even know existed.” Essentially, users will now get an extra three-hour of battery life than they used to.