What does Apple plan to do with the mammoth Beats Music streaming service it acquired last year? The Cupertino-based company stepped on the stage today at its developer conference — also known as WWDC — to finally answer this widely concerning question that has been troubling the humanity for a while.

Simple. Apple is releasing its own music streaming service. The company announced today Apple Music, which as it smirked, is three things: a streaming music service, a worldwide live radio station, and a new way for music fans to connect with their favorite artists

Beats 1 is Apple’s first 24 x 7 global radio station. It plays music “not based on research, not based on genre, not based on drumbeats, just music that is great and feels great.” There will also be other stations for different genres. Apple says Beats 1 will be broadcasted live in over 100 countries.

Apple Music is a streaming service with a catalog of over 30 million songs. The service utilizes Beats Music’s signature music curation. In a new tab called “For You,” users will see personalized playlists and albums based on the kind of music they listen to. “It isn’t just algorithms, it’s recommendations made by our team of experts,” the company assures. Furthermore, users will also be able to take help from Siri, and ask her to play songs from a specific era. 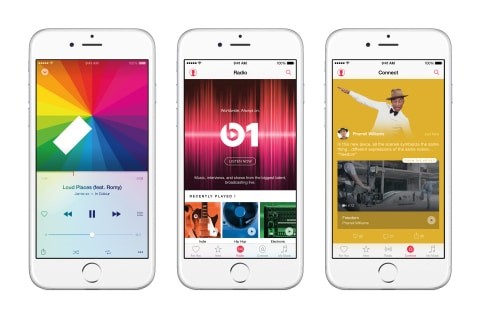 “We love music, and the new Apple Music service puts an incredible experience at every fan’s fingertips,” said Eddy Cue, Apple’s senior vice president of Internet Software and Services. “All the ways people love enjoying music come together in one app — a revolutionary streaming service, live worldwide radio and an exciting way for fans to connect with artists.”

“Apple Music is really going to move the needle for fans and artists,” said Jimmy Iovine. “Online music has become a complicated mess of apps, services and websites. Apple Music brings the best features together for an experience every music lover will appreciate.”

The company also announces Beats Connect, with which artists will be able to connect with their fans. Interestingly, Apple is also providing the platform to unsigned artists who will also be able to share their music on Apple Music.

The service, much like Spotify and Pandora it will be competing with, is subscription based. Pay Apple $10 a month and listen to unlimited music. Or better, pay them $15 a month, and have up to six family members use Apple Music.

Apple Music arrives on iOS with v8.4 update on June 30, but what’s more exciting is that it will also be arriving on Android, Windows as well as Apple TV, but that happens later this year. Also, for first three months you don’t have to buy a subscription as the company is offering a free trial to all.