At its annual Worldwide Developers Conference (WWDC), Apple made a number of announcements including El Capitan update to desktop operating system OS X, and iOS 9 which now supports multitasking and offers plenty of new features in Siri and Maps. But developers will be more thrilled about something which the company didn’t announce at the stage last night. 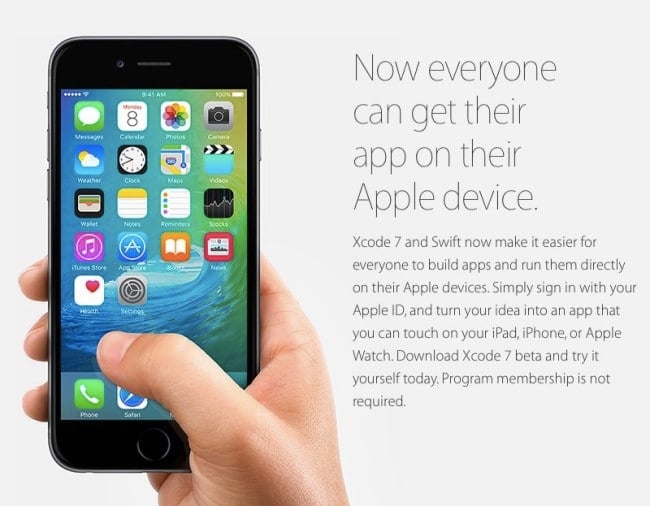 On its developers page, Apple announces the launch of the latest beta version of Xcode. The development tool is receiving a number of interesting features, but more significantly, it outlines a big change to company’s policy.

Starting with the beta of Xcode version 7, the company is allowing developers to test their apps on Apple devices even if they don’t have a developer membership. This makes it possible for unsigned developers — those who don’t have an eligible developer account (which is also paid) — to deploy their own apps on their own devices. For publishing apps on App Store, however, they will still need to be a paying member.

“Xcode 7 and Swift now make it easier for everyone to build apps and run them directly on their Apple devices. Simply sign in with your Apple ID, and turn your idea into an app that you can touch on your iPad, iPhone, or Apple Watch. Download Xcode 7 beta and try it yourself today. Program membership is not required,” the company notes on Xcode’s page.

Google Pixel 4 No Longer Allows You to Store Your Photos in…
iOS vs Android: Does it Matter Who Copied Whom Any Longer?
[Long term Review] iPhone 12: No longer the “lesser” iPhone
Micromax's IN a Red(mi), Real(me) World - no longer just…
Best Internet Speed Test Services (Websites and Apps) to Use…
Android 11 Developer Preview: All New Features and Timeline