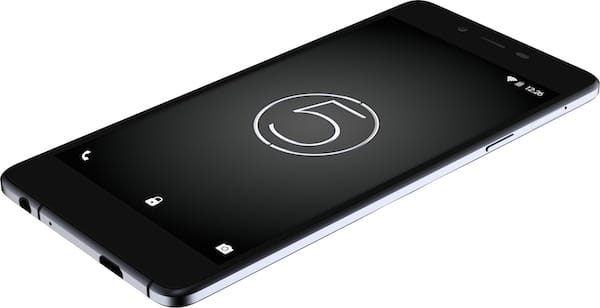 The Micromax Canvas Sliver 5 isn’t technically the slimmest smartphone, as we have seen phones smiler than 5mm in the past, but Micromax claims that they are misleading and not really that slim all over. At 97 grams, the Sliver 5 is also claimed to be the lightest smartphone in the world, making it the world’s slimmest and lightest 4G smartphone – something we reserve our judgment on.

The Canvas Sliver 5 is made from aircraft grade aluminum. It comes with Dirac HD sound and NXP Smart Power Amplifier providing louder sound and deeper bass. The 4.8-inch Super AMOLED screen has HD (720p) resolution and is protected by Corning Gorilla Glass 3 screen over it. The phone is powered by the 64-bit 1.2GHz Qualcomm Snapdragon 410 quad-core processor, paired with 2GB DDR3 RAM.

Micromax has managed to put the 8MP Sony IMX 219 lens without having a bump on that thin chassis. The Canvas Sliver 5 comes with a 2000 mAH high density Lithium Polymer battery and an intelligently optimized User Interface which Micromax claims to save over 30% battery.

At Rs.17,999, the Micromax Canvas Sliver 5 looks pricey. But then, it’s not your run-of-the-mill smartphone with insignificant design. Micromax is banking on the design to push the sales. The Canvas Sliver 5 will take on the likes of Gionee Elife S7 (which surprised us a great deal) and will have its task cut out to come out a winner. We shall be back with our initial impressions and full review soon.