In a style true to their self, OnePlus has started revealing the hardware specifications of its upcoming OnePlus 2 smartphone. In a thread posted to the official forum, Pete Lau, the company founder has confirmed that the next flagship will carry the infamous Snapdragon 810 processor from Qualcomm.

There have been several leaks and rumors over the hardware components of OnePlus 2, one of which had claimed that the phone will carry the Snapdragon 810 along with 3GB of RAM. This is in line with that rumor, although OnePlus hasn’t confirmed the RAM present on the smartphone yet. 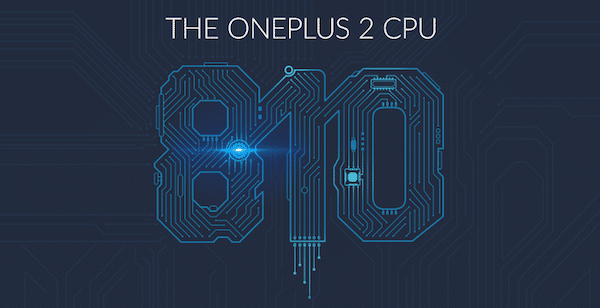 Snapdragon 810 has been in the news for all the wrong reasons, with Samsung infamously putting down the processor while launching Galaxy S6, saying that the processor gets warmer beyond normal. Qualcomm tried to do some damage control by getting few other OEMs to vouch for Snapdragon 810. Although LG announced the G Flex 2 with Snapdragon 810, the Korean company took a step back and came out with the Snapdragon 808 for its flagship G4.

OnePlus though, is confident that Snapdragon 810 is the best fit for OnePlus 2. And goes an extra mile to prove that by quoting the version of Snapdragon 810 being v2.1, which apparently has been optimized in association with Qualcomm.

While we played around with other options, we always came back to the 810. Its speed and ability to multitask while maintaining optimal battery performance remain unmatched amongst others in the industry.

Pete says that the Snapdragon 810 v2.1 puts desktop-grade computing power into your hands. The SD 810 also results in “better video, a quicker camera, and an unbelievable gaming experience.”

Pete Lau acknowledges that the market is abuzz with heating issues on Snapdragon 810, but claims that OnePlus has figured out a way to keep it under control, and in fact it will be cooler than ever. “Although there have been reports that the 810 runs warmer than its predecessors, we assure you that we have taken all the necessary precautions and beyond to prevent this from occurring in the 2.”

In addition to the processor on OnePlus 2, we are now certain to see the OxygenOS as well. Although it was an open secret that the company will not be carrying the Cyanogen OS after the relations went sour with whatever happened in India last year, the readiness of OxygenOS was in question. Pete claims that OxygenOS has been optimized to work beautifully with the Snapdragon 810.

We expect OnePlus to reveal more such details in coming weeks in lead up to the actual launch expected to happen sometime in July this year. Stay tuned for more details.

Was this article helpful?
YesNo
TechPP is supported by our audience. We may earn affiliate commissions from buying links on this site.
Read Next
OnePlus Nord Watch vs Amazfit GTS 2 Mini New Version: Which One Should You Buy?
#oneplus #OnePlus 2