There’s a plethora of apps that you can find on the iTunes store for your iPhone or iPad, there’s no doubt about that. But the fact that there are newer ones being submitted makes it clear that there’s still plenty of room for improvement.

That’s why we want to present to you the DarkSky app for iOS devices, which has now reached its 5.0 version. Thus, the app is now adding a couple of features which make it worthy of your attention. 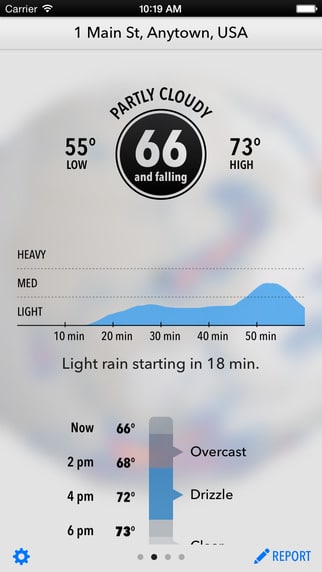 The app has been revamped with a brand new layout which comes with a detailed hour-by-hour timeline for the next 24 hours and also for each of the next 7 days. The app was already able to provide down-to-the-minute rain alerts for the next hour, but now it allows the users to create custom alerts covering the next 24 hours. Thus, you can watch for temperature, precipitation, snow accumulation, wind, and others. DarkSky also informs that it will now push severe weather alerts from the government weather service. It’s important to note that the app works primarily in the US, UK and Ireland only for now.

If you want to contribute with your feedback regarding your local weather and what exactly is happening outside, you can now do so thanks to the new weather reporter. Furthermore, iPhone 6 users can now opt in to allow their devices to automatically provide the pressure sensor data which seriously improves the short-term forecasts.

Apple Watch owners can also make use of the app as its available for them, as well. The app is now much faster and it now gets an UV index, as well as the landscape mode for iPad users, a feature which has been requested by many users.

What makes this app special is the fact that it’s considered to be among the most accurate apps one can currently find for all of his iOS devices. It also gets beautiful weather animation and allows you to watch weather patterns as they evolve globally. Give it a try and let us know what you feel about it, because we did enjoy it a lot!

How to Move the Taskbar in Windows 11 to Your Preferred…
How to Hide or Spoof Location in Google Chrome, Microsoft…
How to change Screenshot Capture Format and Save Location on…
How to Change the Download Location in Safari on iPhone
How to get Dark Mode on a Kindle
How to Enable Dark Mode on WhatsApp