Well, there’s no truly decentralized, user-controlled music streaming service yet. But it’s kind of the idea behind doubleTwists’s new CloudPlayer app that’s “launching on Android first” (iOS version should be tagging along soon?).

doubleTwist CloudPlayer lets you hack your own music streaming service that’s currently limited to Android and the storage space you have on Dropbox/Google Drive. You upload your entire music collection to either/both cloud storage services (which can take a couple of hours to a couple of days), then get the Android app, connect respective accounts and let CloudPlayer do its thing. The app will scan your cloud storage, identify songs and sort them in the app. I tried it with a couple of albums and it worked surprisingly well. But it’s yet to be seen how it handles a library filled with 10,000 songs. 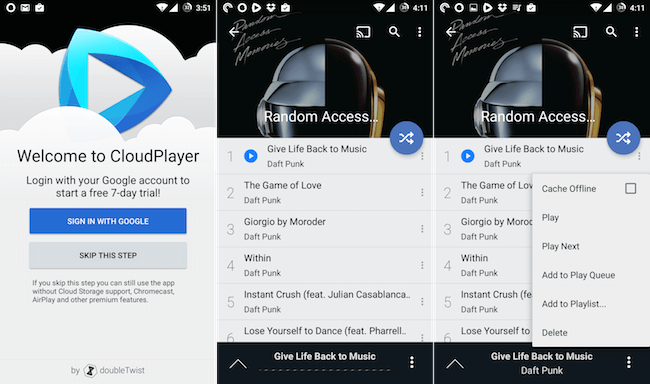 You can try the app for 7 days by logging in with your Google account but after that you’ll have to pay $4.99 using IAP to continue using the cloud features. That means after 7 days, the core features of the app will be disabled and the app will turn into just another local music player.

Of course, CloudPlayer is no streaming service killer, even though doubleTwist’s Jon Lech Johansen makes a really compelling argument against Google Play Music.

But if you’re nerdy enough to take control of your own (currently limited to Android) streaming service, and you have enough free cloud storage accumulated via promotions (I have 71 GB in Dropbox right now), give CloudPlayer a try. If not, you can buy the $1.99/month 100 GB plan from Google Drive and it’ll still cost 5 times less than Spotify (Dropbox doesn’t have such a plan). Hopefully, CloudPlayer clients for iOS and the web aren’t too far away.

But once the music is uploaded to Dropbox, you can use different apps on different platforms to stream your music library. Tunebox is a good iOS alternative to CloudPlayer.