We knew that something big is brewing in the Motorola stable and all the fingers pointed at the Moto G 2015 and the Moto X 2015. Motorola has already sent an invite for its event on July 28 but it dropped very subtle clues about the phones itself. The newly surfaced promotional video not only shows off the Moto G 2015 but also gives away all its secrets leaving nearly nothing for imagination. 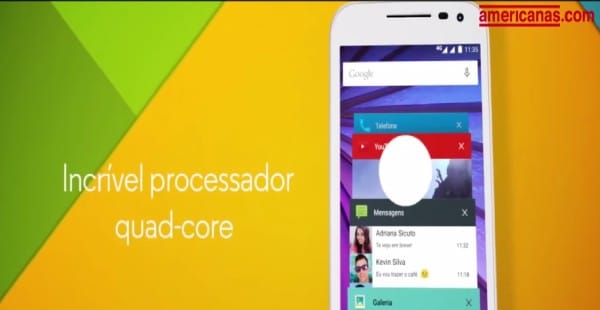 Recently a vendor had leaked the photos of the Moto G 2015 and the fact that the promotional video sports the same device in it adds an extra bit of credibility. Moto G 2015 is rumored to be powered by the Snapdragon 410 SoC and in all likelihood the phone might come in a 1GB RAM/8GB storage variant and a 2GB/16GB storage version.

The video starts off with a line “We present the New” and shows a couple of slides along with explaining the features of the phone. Moto G 2015 will be featuring a 5-inch FHD display and this time around it also comes with IPX7 certification, which in simple term tells us about the phones water resistant features.

The camera shapes up in the form of 13-Megapixel primary sensor coupled to a dual LED flash. Front camera is a 5-Megapixel sensor. The video also touts about the presence of a memory card slot which is being ditched by many phone manufacturers in the name of design limitations. Motorola will also be offering the MotoMix customization option wherein you can play mishmash with different shells and also customize your own Motorola shell. On the connectivity front the phone will come with 4G LTE and the usual bunch of connectivity options including Dual Sim support. The video ends with a rather catchy line that says “Choose smartphone for better or worse”

Apart from all the other feature we have an inkling that Motorola will be banking on the ruggedness and durability of the phone. That being said the new Moto G 2015 will be coming with IPX7 certification which is same as the Apple Watch. The certification explicitly mentions that it can “Withstands incidental exposure to water of up to 1 meter for up to 30 minutes” further it also adds that “Any immersion of more than 1 meter, regardless of duration of immersion, or any immersion of more than 30 minutes, regardless of depth of immersion”.

Motorola seems to be dead serious about disrupting the market once again and this time around they have come up with well weighed upgrades as opposed to the Moto G 2014 which was not much of an improvisation from its previous self.

The sub-Rs 12,000 smartphone market has a new king: the Moto G9 Power
Read Next
Source: Unbox