InFocus, the American Tech brand has unveiled new entrants in its Indian smartphone lineup. In totality, the launch consisted of four smartphones and a tablet. At a mega event in New Delhi, InFocus unleashed a plethora of products to the Indian consumers. Earlier this year, InFocus had entered the Indian market with the M2 followed by the M330 release. 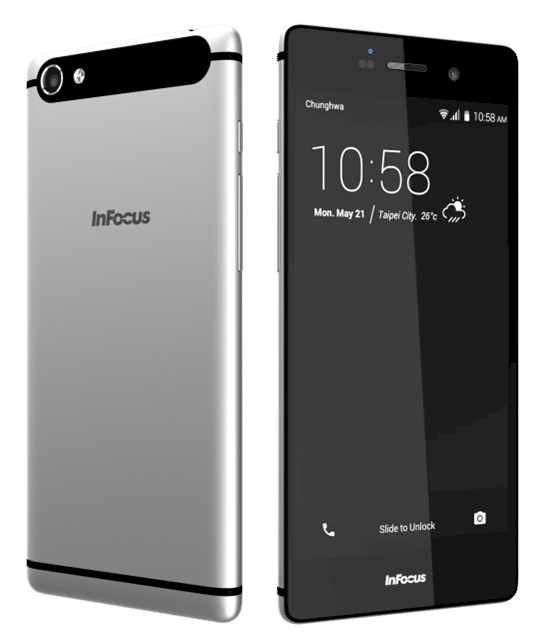 The InFocus M550 boasts of a ‘naked eye 3D technology’ which lets users watch 3D videos without actually wearing the glasses. The InFocus M550 has a 5.5-inch FHD display that draws its power from an octa core MT6752 processor clocked at 1.7GHz and paired with a 2GB of RAM. Storage is managed by a 16GB Internal memory. It runs on the age old Android 4.4 KitKat with company’s own InLife UI on top it. There’s 4G LTE support available as well. There’s a 13MP camera on the rear along with 5MP front facing snapper. The big 3100mAh battery should be good enough to juice up all of these, but takes its toll on the size, as the phone weighs a whopping 194g.

The top of the line Infocus M812 is quite a stunner to look at, thanks to the anodized unibody design. Infocus M812 is powered by a quad-core Snapdragon 801 chipset clocked at 2.5GHz and tagged with a 3GB of RAM. Other highlights of this device includes 13-Megapixel primary sensor and 4G LTE connectivity. Unlike the M550, the M812 runs on the near latest Android 5.0 Lollipop. It’s also one of the few phones that comes with 8MP front facing selfie camera with 80-degree wide angle lens with f1.8 aperture. The 2,900 mAh battery looks a bit less to juice up the 5.5-inch FHD screen.

InFocus M808 is a mid-range device powered by a octa core 64-bit MediaTek MT6753 processor clocked at 1.3GHz and glued to a 2GB of RAM. Camera department is taken care by a 13-Megapixel primary sensor and a 5-Megapixel secondary sensor. The phone runs on the latest Android Lollipop 5.1 wrapped within the company’s Inlife UI. The 5.2-inch FHD screen draws power from a nominal 2450mAh battery.

The InFocus M812 is priced at Rs 19,999 whereas the M808 is priced at Rs 12,999. But it’s surprising to see a new entrant like InFocus flooding the Indian market with so many new devices (with weird naming terminology) in such a short span of time. The company is currently selling its devices exclusively online and is yet to ramp up its after sale service in the country.

Jio Browser Rebranded as JioPages with improved design and…
eBook era cometh? Penguin Launches Exclusive eBookstore on…
Oppo F21 Pro Review: Eye candy for the phone flaunters!
8 Best Google Meet Tips and Tricks to Use it Like a Pro
20+ macOS Finder Tips and Tricks: Use Finder like a Pro
Paytm launches All-in-One Android POS for SMEs and Merchant…