WhatsApp has been doing a flip flop from quite some time when it comes to Google Drive backup option. It was introduced in one of the earlier versions and was silently withdrawn in the version 2.12.233 (at least for a few). WhatsApp kept on dilly dallying until it once again launched the feature in  version 2.12.214 starting this month. 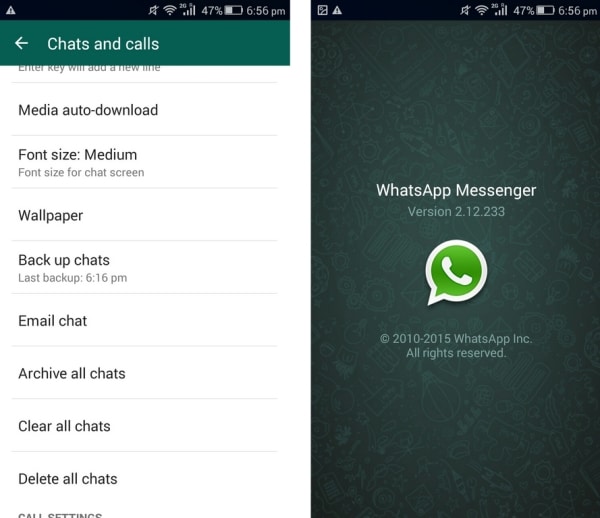 We thought the feature has finally been confirmed after few beta revisions and it seemed that WhatsApp will be sticking to the Google Drive backup feature for good. Much to our dismay the latest version of the app 2.12.233 had removed Google Drive backup feature. The Google Drive option is no more accessible when we try to backup the chats whereas the  previous versions of the application allowed users to backup not only their conversations but also the image and other media (except for video.)

The first backup would usually be large and post that it would increment marginally depending on the new in app data that is collected in between the backups. The backups are not shown as a folder in the Google drive and instead they can be found in Settings>Manage Apps. Users need to install WhatsApp and sign in with the same Google account in order to restore all the backed up data.

Other reports contradict the feature and mention that it is only for devices on Android Lollipop 5.0 and above. Another alleged workaround is to uninstall the app and reinstall it, again all these methods are not guaranteed to work.

Since we cannot guarantee you a sureshot result all we can ask you to do is install the 2.12.231 version and just hope with fingers crossed that the backup feature would magically make it into your WhatsApp. That being said we feel that WhatsApp is still extensively testing out the feature and maybe the company feels that the Google drive backup is still not ready to make the cut.