Cortana Available on Android as a Public Beta, Provides an Alternative to Google Now

Microsoft had announced a few months back that they will be launching Cortana, the Windows based personal digital-assistant for Android and iOS devices. The company finally announced that Cortana app public beta will be available for Android starting today. 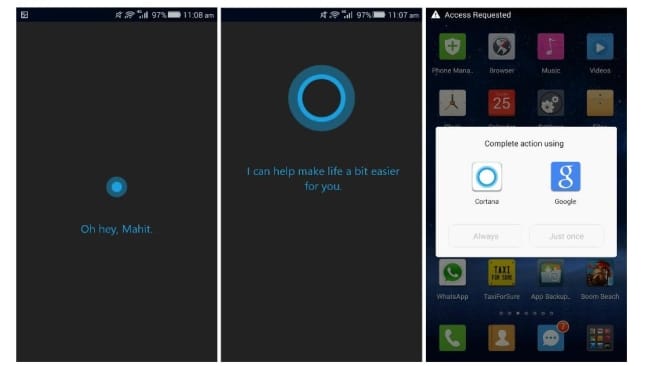 I have been using Cortana ever since it was released and it has been a neat experience till date. The digital assistant is intuitive and it has started to blend with most of the third party Windows app as of now. Microsoft seems to be hugely backing on the Cortana and trying to develop it as a standalone application across various platforms, just like how it did with Here Maps, which was initially a Windows exclusive feature.

Microsoft recently imbibed Cortana in Windows 10 and although i was not so inclined in using a Personal Assistant on a desktop, things have been shaping up well. Setting up reminders, searching web-on-the-go, and real time tracking of important information including flight details and task management.

That being said, some of the features like toggling settings and waking up the app by saying “Hey Cortana” are still exclusive to the Windows family. Since it is still in beta it would be safe for us to expect new features and an increased level of stability in the upcoming releases.
Microsoft seems to be keen on replacing Google Now as the default search tool in Android or at least give users a chance to choose between the two.

The very fact that Microsoft allows you to open Cortana by touch of the home key is a clear cut indicator that the Redmond giant wants to openly go loggerheads with Google Now. We are yet to ascertain how well the Cortana will blend its support for third party apps, we tried using Cortana for driving directions with Google Maps and it worked well but it couldn’t carry out commands involving any third party apps.

As of now Cortana is available for Android only for the U.S markets and Microsoft is planning to roll it out to other markets soon. However users outside U.S can also give the Cortana a spin by downloading the apk file from here.

Microsoft ‘Play My Emails’ uses AI to save you time by reading ou...
Read Next
Source: Windows Blog