Xiaomi fans are always hungry for new handsets, and it seems that the company is finalizing production of the Xiaomi Mi 4c, a new smartphone which appears to be similar to the Mi 4i. A picture with the retail box of the smartphone has leaked, thus revealing its most basic specs. 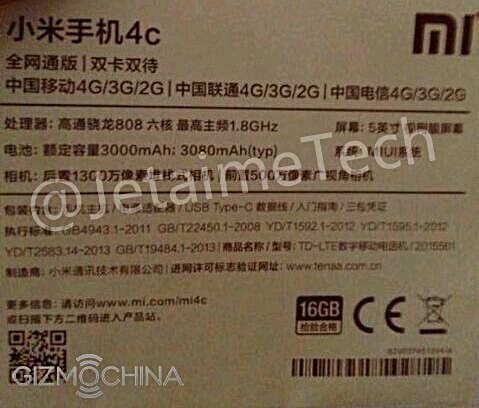 The Mi 4i was released mainly for Indian users, so it seems the Mi 4c is aimed at domestic Chinese consumers, first of all. We say the device is similar, because it features the same 13 megapixel rear camera along with a 5 megapixel one, 2GB of RAM, 16GB of internal storage, and a similar 3,080mAh battery.

But the device seems to be getting a better processor, the Snapdragon 808 SoC, which is actually the same chip found in the LG G4. The processor comes with two high power Cortex-A57 CPU cores, four lower power A53 cores and an Adreno 418 GPU, which is significantly more powerful than the octa-core Snapdragon 615 on the Mi 4i, built from lower performance Cortex-A53 cores and an Adreno 405 GPU.

The Mi 4c also seems to be getting a USB Type-C connector, which means it could be the first smartphone from Xiaomi to get the new connector type. The smartphone also sports a 5-inch 1080p display and it seems that a 32GB model is also rumored.

The handset is believed to be coming with MIUI 7 OS out-of-the-box. The device is said to cost around CNY 1,299, which is around $200 and is expected to be announced as early as this week.