Forget Razor, Use Skarp to Shave with Laser Instead!

Grooming for men hasn’t changed much for years, especially for daily shaving needs we still use the same old shaving kit. If you are wondering what would one possibly do to except change the blade arrangements and fiddle with other minor things, here is a cool new startup for you. Skarp is a piece of gadgetry from future which is so futuristic, that it feels like something pulled out straight from a science fiction.

The Skarp is your very own Laser shaving kit that uses a certain wavelength to shave the hairs without even actually touching the skin surface. Skarp’s prototypes are chiseled out of 6061 grade aluminium and as we said earlier, the design looks out of this world, specially for a shaving razor. Skarp is the brainchild of Morgan Gustavsson who has been working in medical and cosmetic laser industry for the past three decades, in fact he claims to be the one who invented IPL (Intense Pulsed Light) in 1989 which still maintains to be one of the most preferred method of hair removal.

Now we all know that this ain’t magic, and the technology behind the working of Skarp is sure to blow us out. Wavelengths of light which would cut through the light hair had already been discovered but the challenge was to find a way by which even the light hairs can be cut. That is when the team discovered a chromophore in the hair which would be cut instantly when impacted by a particular light wavelength, to make the things better the research showed that this chromophores is shared by all the humans irrespective of the age, gender or sex. 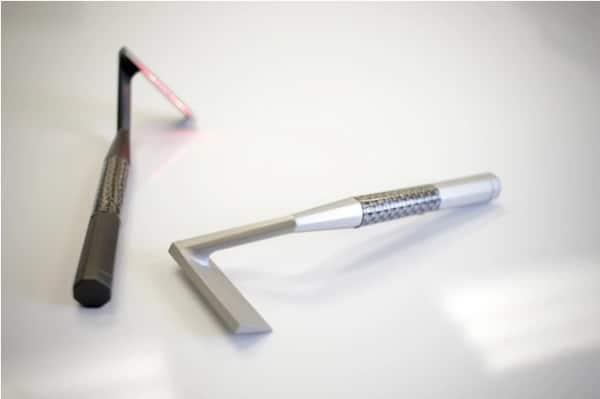 Disposable Razor blades are actually creating quiet a havoc and resulting in landfills and bloating garbage dumps. Since Laser has an average life of around 50,000 hours it can last for many shaves. The best part though is that you can bid adieu to scratches, burns, infections, accidental cutting and the overall pain associated with the entire ordeal.

The company is looking out for capital which would eventually help them to fine tune the product so that the production can be automated. If you fancy a futuristic shave and want to get your hands on the Skarp than you can do so by pledging $139 on KickStarter, in order to fund the company with capital in the next 24 days.

Forget Perceptions, Realme and Redmi DID move up the price…
[First Cut] Realme X50 Pro: Forget 5G, This Pro is a Premium…
Forget the iPhone SE, OnePlus 8’s biggest challenge is its…
[First Cut] Samsung Galaxy M51: The M Series Gets its Fill…
What is Tor and Should You Use it? [Explained]
Sign in with Apple: What it is? And How to Use it? [Guide]