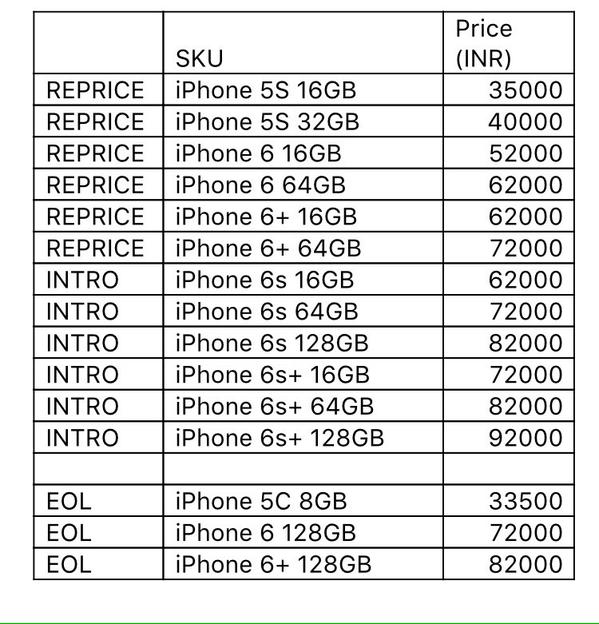 Last year, the iPhone 6 pricing started at Rs 53,500, while the iPhone 6 Plus started at Rs 62,000. Since then the Indian rupee has depreciated by around 7% to US Dollar, but even considering that, the new prices are rather steep. For reference, the iPhone 6s starts at $695 (including taxes) in the US which roughly translates to Rs 45,500. We should also consider that the Indian government recently increased the import duties of smartphones to around 12% (from 6%) in order to push the ‘Make in India’ campaign. All these have taken a toll on the final pricing.

Apple has just sent out a circular to the resellers with updated pricing of other existing models as well. As expected, the iPhone 6 (which recently had got a price drop) will start now at Rs 52,000, while the iPhone 6 Plus will start at Rs 62,000. iPhone 5s will be the starting model, and will start from Rs 35,000 for the 16GB. Also, Apple has phased out the iPhone 5c and 128GB versions of both iPhone 6 and iPhone 6 Plus.

The iPhone 6s and 6s Plus goes on sale on 16th of this month across multiple online and offline retail channels. Some of them have even started taking pre-orders. This time around, carries like Airtel and Vodafone are expected to offer data bundled offers for iPhone 6s and iPhone 6s Plus from Day 1. Considering the high starting price, that doesn’t sound like a bad thing at all.

We recently did a hands on and first impressions of the bigger iPhone 6s Plus, and are currently testing it out to have the review ready by the time iPhones go on sale in India. Let us know if you have any questions and we shall be glad to answer them here or in our detailed review.

TechPP is supported by our audience. We may earn affiliate commissions from buying links on this site.
Read Next
Alert! You’re Hiding Sensitive Information From Your Images on iPhone W...
#apple #iphone 6s #iphone 6s plus