As it was pretty much expected, Microsoft has unveiled its newest Surface Pro 4 during its event today. The Surface Pro 3 was unveiled back in May, 2014, so Microsoft fans have been waiting for quite a while the release of the Pro 4, but Microsoft was quite busy with Windows 10.

But now that Windows 10 is out in the wild, it seems that Microsoft is confident that the Surface Pro 4 too is ready to take on such newly born rivals as the iPad Pro and the Google Pixel C. As it’s usually the case, the newest generation of the Surface Pro is thinner, lighter, and more powerful, but also features larger display than its predecessor.

Just like a true flagship tablet, if we can say so, The Surface Pro 4 comes with the latest Intel Skylake processors and Microsoft’s Windows 10 with all of its newest features. The tablet, if we can still call it like that, comes with a fingerprint sensor on the keyboard and Cortana integration inside, which makes it a modern and trendy piece of gadgetry, if you ask me.

The Surface Pro 4 is 30% faster than the Surface Pro 3 and 50% faster than the MacBook Air. Obviously, Microsoft couldn’t compare it with the iPad Pro, since the device hasn’t yet started shipping to customers. But there’s no doubt that there’s going to be a fierce fight going on between these two awesome products. Panay also mentioned that “98 percent of people who use Surface Pro 3 recommend it to friends and family,” which is something that we usually see Apple during its events.

One the new Surface Pro, storage goes all the way up to 1TB and you can get as much as 16GB of memory, but, of course, that’s going to cost quite a bit. The new tablet comes with a hybrid cooling system, better spacing between the keys and a thinner cover. The 12.3-inch display comes with 5 million pixels and 267 ppi. 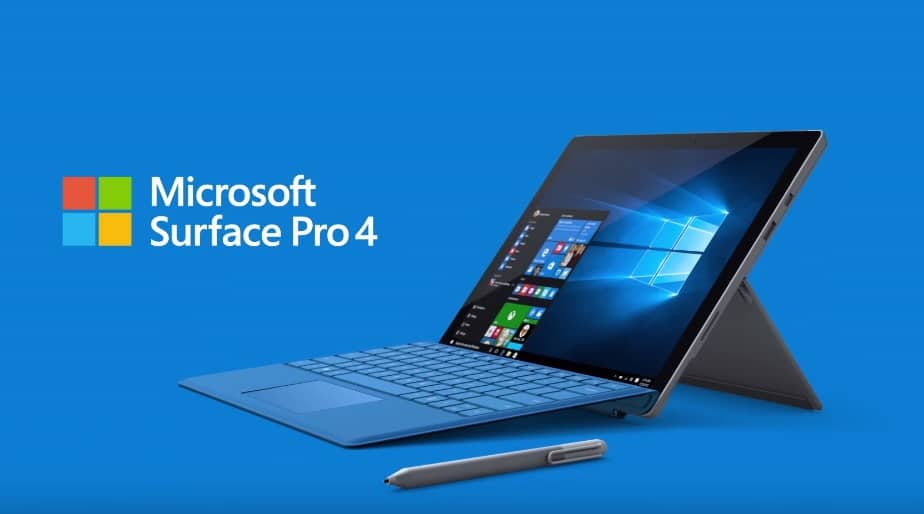 There’s a new PixelSense technology that seriously improves the display and brings the following – 0.4 mm gorilla glass and 1.1 mm backlight unit. Panay said that the Surface Pro has the “best, most natural touchscreen out there” thanks to a 0.4mm-thick Gorilla Glass 4 covering the front and a special G5 chipset to run the optical stack.

Microsoft’s Panos Panay (who by the way has offered a masterful representation on stage) says that the Surface Pro 4 is the “thinnest, most powerful” Intel Core PC ever shipped and it’s “not even close.” The tablet is 8.4 mm thick and is thus the “thinnest most powerful Surface yet.” It comes with four USB 3.0, two 4K DisplayPort, ethernet and a docking station which also works with Surface Pro 3.

The new Surface Pro comes with an all-new Surface Pen as well, which comes with an eraser on the end of it, has 1,024 levels of pressure sensitivity and attaches magnetically to the side of the tablet when you don’t need to use it. The Surface Pen it’s apparently not rechargeable but Microsoft claims it has a 1 year battery life.

The nice thing is that you don’t have to buy it separately, as it’s the case with the Apple Pencil. It also comes with Cortana integration, as you just need to hold down the pen eraser and it launches Cortana. It’s also going to be available in five different colors. There are new colors for the keyboard, as well. The Windows Hello camera is integrated, as well, so you just look at the Surface Pro 4 and it logs you in.

Once again, with the Surface Pro 4, Microsoft wants you to use it to replace your laptop. The device is available for pre-order starting with tomorrow for a price of $899 and will be coming to customers from October 26.

Was this article helpful?
YesNo
TechPP is supported by our audience. We may earn affiliate commissions from buying links on this site.
Read Next
How to Request Read Receipts in Microsoft Outlook
#microsoft #Surface Pro