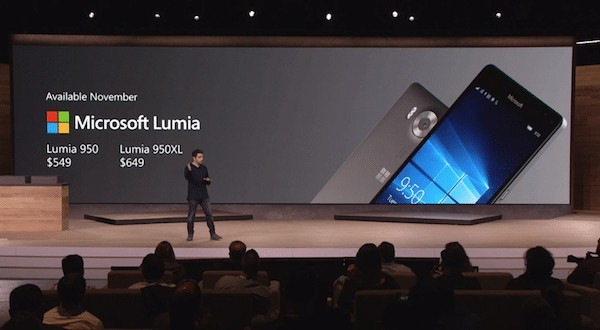 As we reported earlier, Satya Nadella had announced that both the devices will be available in India starting from December, that being said there is still no information on the price tags these phones will carry in the Indian context.

Microsoft is all set to release the Windows 10 Mobile on November 12 along with the Thunderbolt 2 update. The fall build will bring about a host of improvements and is expected to fix most of the bugs plaguing the ongoing version of the Windows 10.

Both the devices share the same innards when it comes to imaging. The primary camera sensor is a 20-Megapixel unit with Optical Image Stabilization and supports native 4K video recording. The secondary camera shapes up in the form of a 5-Megapixel sensor. Both the device come with an expandable memory card slot and Type-C USB port. Microsoft is piggybacking on the Windows 10 success and intends to build a sustainable Windows ecosystem, which is the very reason the Redmond company is introducing a Windows 10 update even for the Xbox gaming console. Microsoft will also start selling the Display Dock which will bring the continuum feature across the Windows devices.

Xiaomi Mi Watch teased ahead of its November 5 official…
Mozilla Firefox VPN Service Made Available for Android and…
Vaccine for 18-44: Get Alerted When COVID-19 Vaccine Doses…
Android Auto for Phone Screens is now Available for Download…
Google Pixel 4 is available on Amazon India, starting from…
Samsung Galaxy Z Flip is Available for Pre-Order in India…