Airdrop was introduced as an Adhoc service for Apple devices in order to transfer files and share photos in a better and faster way. All you needed to do was open up the application and send the files to another device in the vicinity. Just like most of the other Apple Apps the Airdrop too is just restricted for the AppleeEcosystem. Let’s talk about Snapdrop, a web tool with similar functionality as AirDrop, but without the platform restrictions, which inadvertently means that Snapdrop can be used across multiple operating systems and devices. 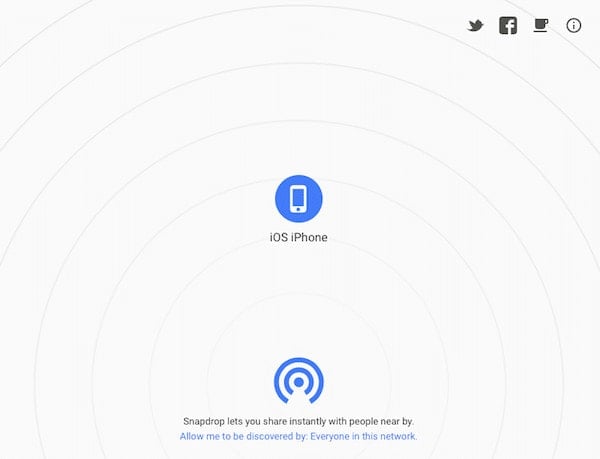 The best part is that in order to use the services you don’t need to install a separate app. As a matter of fact, users are not even required to sign in before using Snapdrop. The tool does what it claims to do, seamlessly transfer the data across two devices on the same network without any limitations on the amount of data that can be transferred.

To enable discovery, the webpage should be open in both the devices on the same network, thankfully the sharing works across different browsers and devices. I tried sending some files from my Android to my PC running on Windows 10 and boy it did work like a charm. Behind the scenes, Snapdrop relies on P2P connection enabling it to transfer data between devices on the same network.

Privacy becomes one of the major concerns with file sharing services, but Snapdrop seems to have taken care of the same by not storing anything on their servers. Snapdrop can turn out to be a great alternative for the Airdrop but before we conclude the same, the Snapdrop does come with its own share of limitations. For instance, I was unable to select multiple photos from the gallery and send it to my Windows 10 PC, the data transfer progress bar is mighty confusing, device detection is still buggy i.e the same device is detected twice and only one of them will connect. Apart from these, I also observed that occasionally transfer speeds stooped down to such a low that it sorts of defeats the purpose.

That being said, the cause of the shortcomings seem to be emanating from the server side and apparently related to scaling up of the app. This is something that Snapdrop can take care of and in the meanwhile it is the only AirDrop competitor which will allow you to send files without actually signing up and installing an app. For other app based services, check out our list.

Missing SHAREit? Try Snapdrop, the AirDrop for every…
AirDrop Not Working? Try These Fixes to Resolve…
Transfer Music between Streaming Services for Free…
Meet JioMeet: a Zoom Clone from India for Video Conferencing
Best Android Apps to Clone Other Apps and Run…
How to Use Notion Web Clipper to Save Any Page on…