“How is this when compared to the iPad Pro?”

We wish there was a way to monetize all the times we have been asked that question today. Ever since Microsoft officially released the Surface Pro 4 and Pro 3 in India today at prices close to that of the iPad Pro, the air is thick with comparisons between the tablet-ic best of Cupertino and Redmond. 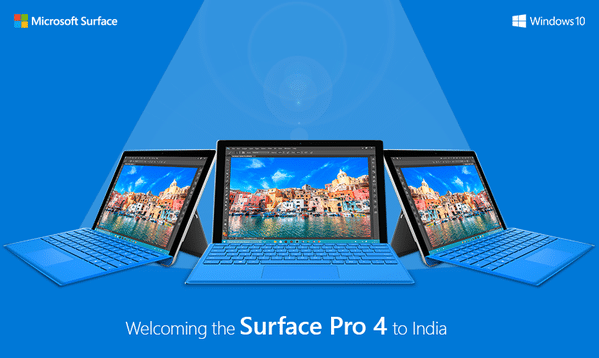 On the surface (pun thoroughly intended), there seem to be valid grounds for this comparison. Both the iPad Pro and the Surface Pro 4 (we will be considering the Pro 4, as it is pretty much the star of the show – there is only one variant of the older Pro 3 in the market) are large-ish tablets with displays in excess of 12 inches. Both boast very good hardware. Both come with expensive keyboards that attach magnetically to them, and both also sport styluses that allow users to scribble on them. Oh, and both cost a fair bit as well, much more than your run of the mill mid-segment notebook – the iPad Pro’s 128 GB model costs Rs 79,990, while the Surface Pro 4 starts at Rs 89,990.

But scratch the surface (pun intended – oh this is fun!), and you will start seeing the fault lines in this rationale. Even Microsoft seem to realize this, for in their presentation today, the only Apple device that was mentioned was the MacBook Air – the Surface Pro 4 was stated to be 50 per cent faster than that worthy. The iPad Pro was not mentioned by name, but just hinted at. But take your eyes off Cupertino for a while and you will see what we think is the real competition that the Surface Pro 4 faces, which is actually closer to home – just about every touchscreen notebook with a Core i5 processor and above and 4 GB RAM and above, running – note this – Windows 10.

For, as we pointed out in an earlier article, the Surface Pro 4 claims to be the tablet that can replace your notebook. The iPad Pro however sticks to just being a bigger, more powerful and productive iPad – it does not come with USB ports and runs iOS, which has been designed for Apple’s mobile devices (Apple would be committing high class suicide if it positioned the iPad Pro against notebooks, as the first targets would be its own MacBook, MacBook Air and MacBook Pro devices). And the Surface Pro 4 is not targeted at tablets but at notebooks – we kept hearing people say on stage how they were no longer missing their notebooks ever since they switched to the Surface. So which notebooks can the Surface Pro 4 replace? Well, obviously those from the Apple camp, but also those that run Redmond’s own OS, Windows.

And actually that has been the case all along. No matter how much the fanboys might like to make the Surface an iPad rival (oh the joys of another Microsoft vs Apple battle, just like the eighties and the nineties and the… you get the idea!), the fact is that Microsoft’s tablet’s biggest challenge has come from its own Windows-running brethren. The iPad has never had any threat from other Apple computers because they were (before the Pro) at much higher price points and always ran a very different operating system. Even the Pro, for all its ability to step into the shoes of a notebook (as our iPad Only Diaries showed), is not a classic notebook replacement for most people simply because it does not run a proper desktop OS or support full desktop apps and does not have connectivity options like USB ports and SD card slots. 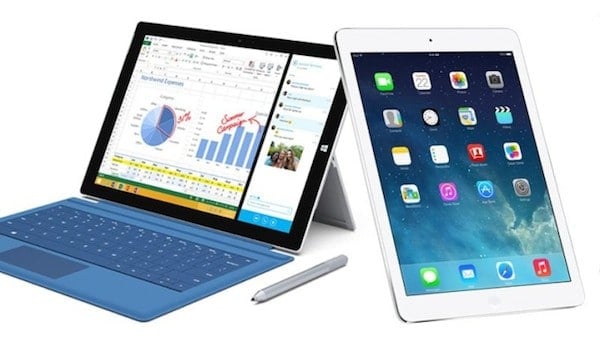 The Surface, now, is a very contrary beast. It runs Windows 10, which is available on hundreds of computer models all over the world, some of them stunningly well-crafted (ask Raju PP about the 2015 Dell XPS 13 if you believe us not). And once again, no matter what the fanboy brigade (and it is a vocal one) says, the fact is that Windows 10 has not been designed only for touch, but for touch and type, unlike iOS, which is totally touch-oriented. Yes, Microsoft might have called the Surface a tablet and we have seen our share of users who using a Windows 10 device as a tablet, but the staggeringly vast majority of Windows 10 PC users employ a keyboard to get more out of the OS. Let’s be blunt – you are more likely to see a Windows 10 PC user using a hardware keyboard than an iOS one. And well, if you want iOS on a large screen, you have no choice other than an iPad, but if you want Windows 10 on a similarly large display, well, there is a whole sea of options from just about every brand at different price points, from Rs 25,000 to Rs 1,50,000. No, not all of them will be as powerfully specced and well-designed as the Surface, but many will.

Which is where the Surface faces its stiffest challenge in India. Yes, it will be compared with the iPad Pro by many (us included) and will be found superior or wanting depending on perspectives and need scenarios, but its real battle is going to be against its own numerous Windows brothers and sisters. There is a new candidate for Sheriff in Windowstown. But ah, not Tablettown.

Was this article helpful?
YesNo
TechPP is supported by our audience. We may earn affiliate commissions from buying links on this site.
Read Next
With Football Manager 2023 Touch, Apple Arcade finally has its “killer ...
#iPad Pro #Opinion #Surface Pro 4