After launching the YU Yutopia which came with a tagline of the most powerful phone, Micromax has launched the biggest smartphone ever. The Canvas Fantabulet features a 6.98-inch display (Micromax is trying really hard to ensure it’s not 7-inch) and it aims at making a place for itself in the rather crowded phablet market in India. 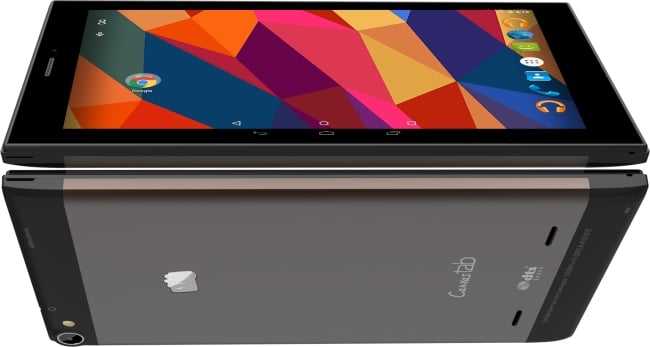 The mammoth 6.98-inch display is set at HD (720p) and it is complemented by the dual box speaker setup at the front. The Canvas Fantabulet draws its power from an unnamed quad-core processor clocked at 1.3GHz and paired with 1GB of RAM. On the imaging front, the phablet offers an 8-Megapixel primary camera and a 2-Megapixel secondary sensor. Micromax must have had a hard time to shave off that 0.02-inch so that people don’t call this a voice-calling tablet because of its 7-inch screen.

The Canvas Fantabulet offers 8GB of internal storage along with microSD card support. The device is backed up by a 3000mAh battery and runs on Android Lollipop. Also, you will get the usual bundle of applications which Micromax usually preinstalls in all of its phones – not something you’d like on a phone with just 8GB of internal storage. The Fantabulet comes equipped with the usual bunch of connectivity options including 3G, Wi-Fi and Bluetooth 4.0, however the device misses out on the quintessential 4G LTE connectivity which can be a deal breaker for some. The canvas Fantabulet will be available on Flipkart priced at Rs 7,499 (~$112) and will retail in Chrome Gold color.

While most of us might think that the 6.98-inch display is an overkill, what Micromax is trying to do is tap the sub Rs 10,000 market for the large screened phones. Most of the phones with 6-inch or larger sized screens cost more than 15k. The Micromax Fantabulet will thus have the advantage of the budget buyers who are looking for a large screened affordable device which can also double up as a tablet. That being said, apart from the size of the screen there is nothing much to talk about, the 1GB RAM, 2-Megapixel secondary camera and the unnamed quad-core processor all scream out the same thing, i.e cost cutting. But then if you want to buy a tablet sized phone within the Rs 10k range than Micromax Fantabulet seems to be the only option right now.

Was this article helpful?
YesNo
TechPP is supported by our audience. We may earn affiliate commissions from buying links on this site.
Read Next
Micromax’s IN a Red(mi), Real(me) World – no longer just about p...
#micromax #Micromax Fantabulet