Windows Phone is famous for its word flow keyboard which also held the record for the fastest keyboard (a title now held by the Flesky app). While we wouldn’t mind much about it being the fastest keyboard but the accessibility and the ease of typing is something that would immensely interest me. It was being speculated for a couple of months that Microsoft will be readying a version of its keyboard for iOS and Android, and as a matter of fact, invitations were also sent out to Windows Insiders. 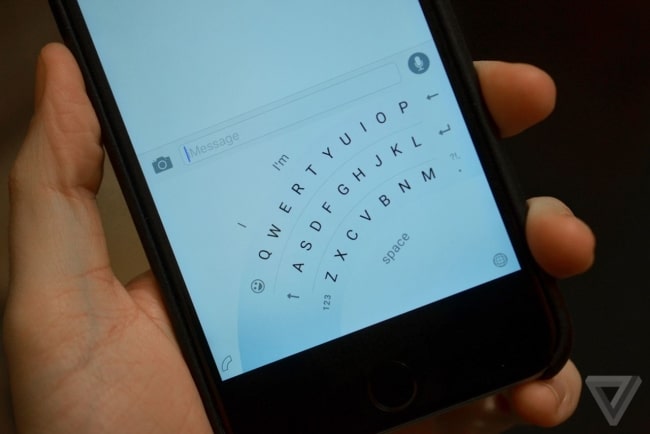 Verge had recently published pictures of the Keyboard in flesh and this gives us a good idea of how the keyboard would actually look and if the layout can manage to score on the utilitarian front. Swipe keyboard has always been a problem in large screened phones even though I’m blessed with a relatively big sized palm, it still is difficult to clutch the phone tightly and swipe the message. Most of the ROMs/UIs on the Chinese phones offer a one handed mode that actually shrinks the size of the screen, this is handy indeed, but probably not as much as Microsoft’s latest keyboard feature.

The Arc shaped keyboard starts from the left corner and offers a typical QWERTY keyboard whose layout is angled to match the arc. This layout is aimed at making it convenient for users to type using their thumbs, something we usually tend to do while typing things on our phones. This layout also places the furthest key inside and would not require you to use the index finger for typing. On the contrary, it would also mean that you can actually hold the phone tighter in single hand while typing.

The caveat though is that this keyboard will be made available only for the iOS users (at least initially), the Android launch is expected to be trailblazing and will only make it by the end of this year.