Last year, Facebook had announced the Live video feature available for celebrities and verified pages so that they could stream things to their fans directly. Now it seems that Facebook will be launching the Live video feature for more people in order to let them connect with the family, friends and followers in a better way. This new feature will be rolled out to everyone in the US via the iOS app to start with and eventually will be rolled out globally. 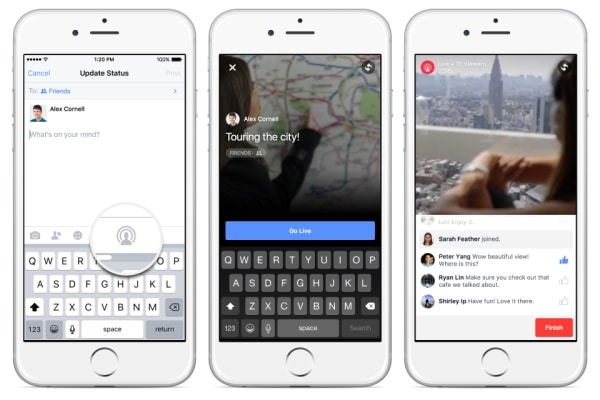 It is apparently easy to broadcast the event and you don’t need to install any other app or package for that, all you need to do is hit the Live video icon on the status update and then Facebook would allow you to write a brief description on what the video is going to be and would also let you choose the audience for sharing the stream. While the broadcast is in progress, you can see the stats like number of friends who are tuned in and the users in turn can comment live on the video, much like the YouTube streams.

The best part is after the broadcast is ended, the video will be saved on your timeline and it is left to the publishers if they want to keep it or delete after the broadcast. Unlike the other live streaming services, Facebook will add a whole new dimension of “Social networking” to the broadcasting, plus you would also be able to access the live stream of your favorite celebrities on your news feed.

In order to be updated about the broadcaster’s next video stream, users can subscribe to their profile and Facebook would beam a notification when the broadcaster goes live next time. As we said earlier, Live is already available for celebrities and verified pages, and Facebook seems to be working on integrating the Live video on the Android phones pretty soon. Apart from US, the Live video will also be introduced for iOS in more countries including UK, Australia, Japan, Sweden, Denmark, Norway and New Zealand.

Facebook Live for general public will deliver a heavy blow to Periscope which has an estimated user base of paltry 300 million (approx user base of Twitter) as opposed to the 1.59-Billion in Facebook. Unlike Facebook Live, Periscope will keep the video live for only 24-hours. That being said, Periscope offers a few advantages like the vertical/horizontal shoot and the support for action cameras like GoPro. It is most likely that Facebook will build these features in the upcoming versions. And it’s not just the Periscope that Facebook is eyeing here, but YouTube itself, which has been striving hard to popularize the live streams for quite some time now. The bottom line is that the other live video players will have to strive to survive as Facebook already has an edge over others when it comes to user base.

TechPP is supported by our audience. We may earn affiliate commissions from buying links on this site.
Read Next
How to See Liked Posts On Facebook [2022]
#facebook #Facebook Live