10 Cool and Interesting Features on the LG G5

LG’s new 2016 flagship, the LG G5 has turned the mobile industry upside down with its modular design approach. The new handset features top-of-the-line specifications and promises a good year ahead for the company as their previous flagship iterations rather failed to stand unique in the innovation side. So, let’s take a look at the 10 cool features you get on the LG G5. 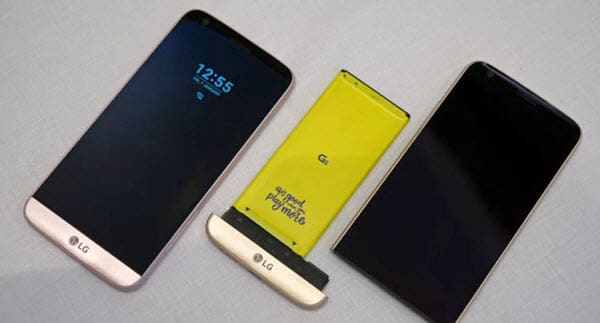 The LG G5 offers something that may not be new to the smartphone space, but something which is beyond proof of concept – the modular design. Basically, this allows the phone to transform to a bunch of other products including a digital camera, a Hi-Fi player and more. The G5 is built in such a way that an expansion slot from the bottom can be pulled out revealing the removable battery and that slot can be exchanged for other add-ons without any hassles. It all sounds very finicky but thankfully, as per the initial reports, the construction makes the experience sublime and also, the possibilities for customizing what your phone can do are endless here.

Another thing worth looking into is the dual camera setup on the back of LG G5. No, it is not being used for capturing depth. Rather, LG has opted for a wide angle lens as the secondary module. There’s a regular 16MP shooter present that is being assisted with a 135-degree wide angle 8-megapixel camera. Unlike what manufacturers have tried to provide with dual lens setup in the past, LG allows you to use both the camera lenses separately if you are capturing a landscape/panorama or together for some fun layering and effects.

Considering what LG has done with its previous flagships, I feel pretty positive about this change and the company has even kept the design in control instead of sacrificing the looks with a big bump on the back.

3. An Always-On Display that doesn’t ruin the Battery Life 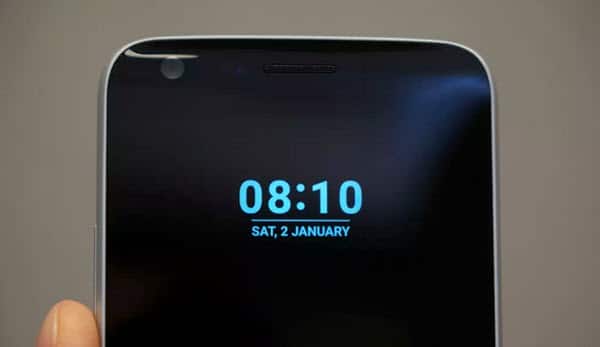 Dubbed as an “Always-On” Display, the LG G5 makes use of a redesigned display technology that lets only a specific part of the screen turn on in order to provide a quick glance at time and your notifications. LG says it will only drain 0.8% of phone’s juice in an hour which promises a lot better battery life when compared to other smartphones with similar features. 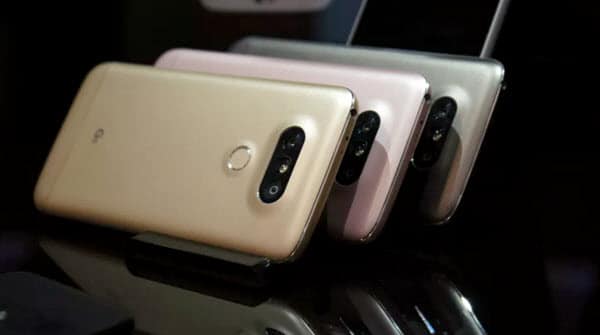 Smartphone OEMs in order to provide a best in class build always sacrifice two of the most important aspects – SD Card support and removable battery. While the former isn’t so left out, removable battery has seen the extinction age in the past year. Sticking to its roots, LG yet maintains the focus on these basic things and is providing removable battery support in the G5 that features an anodized aluminium build along with slim aesthetics. And yes, external storage support up to 2TB.

5. Fingerprint scanner that also works as a power button 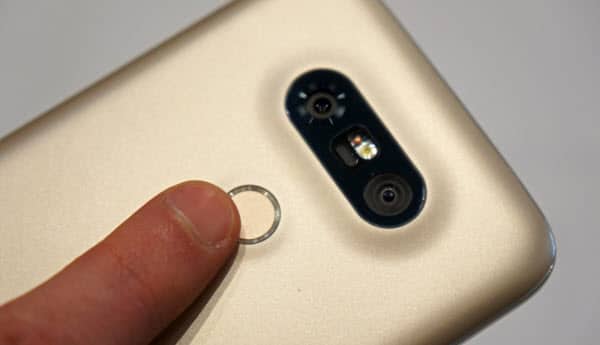 The fingerprint scanner on the LG G5 is present on the back below the camera setup but what’s unique here is it doubles up as the power button and can be actually pressed in. The relevance of having a both the power button and fingerprint scanner was getting a bit futile as users are getting used to the latter. Merging them and getting rid of an extra button to make the phone look unwrinkled is definitely a smart move.

Being the flagship, LG’s G5 flaunts industry’s best available hardware underneath with Qualcomm’s latest Snapdragon 820 along with 4GB of RAM. It even features USB Type-C port that is USB 3.0 compatible. Besides all the additional hardware it includes, the phone is on the lighter side weighing at about 159 grams. Not to forget the NFC and IR Blaster as well. Basically, everything you need from a smartphone. 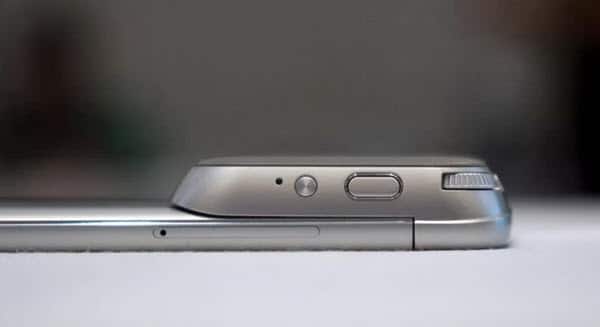 The first module LG showcased at their event is the “Cam Plus” that snaps on the button of the phone and offers an enlarged camera grip for one-handed photography. It features a physical shutter button, a video recording key, an LED indicator, and also a jog dial to control zoom. There’s even a 1200mAh battery pack inside that will help the phone run for 15 percent longer. You are, however, using G5’s camera to shoot pictures though with the grip photos and videos will turn out much more clear and stable.

Sadly, this isn’t something LG is going to pack in G5’s box for free, you will have to buy it separately and the price is yet to be revealed.

LG Hi-Fi Plus is an external 32-bit Digital-to-Analog converter (DAC) and amplifier unit, created in collaboration with Bang & Olufsen, a company known for its sound equipment. The module offers DSD playback and will also come with a pair of H3 B&O Play earphones to enhance the output audio experience. The add-on makes the G5 a bit longer and comes in matte black color. The Hi-Fi Plus will process and upsample audio from any application you’re using resulting in a much clearer and soothing sound. Again, a paid add-on.

Of course, there’s a VR accessory. 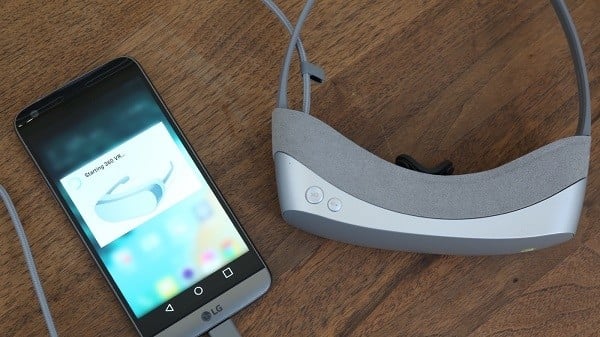 LG also launched two VR modules, the 360 Cam and the VR headset. The camera rocks a dual-sensor spherical lens that can be utilized to capture 16MP shots or 2K videos. Footage from the camera can be directly uploaded to YouTube and Google’s Street View. The VR headset is more interesting here, unlike past attempts to provide a VR experience through smartphones, LG’s VR accessory can work on its own i.e. without lodging your phone inside. Although, the phone needs to be connected and will do all the processing here streaming data to the dual 1.88-inch, 960 x 720 displays. The biggest USP here is that it weighs only a 100g and LG states “you will not look nerdy and dumb” wearing it. If only we didn’t need to wire in the phone all the time. 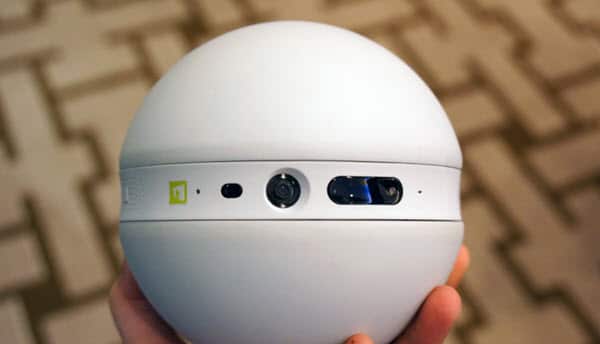 Rounding off the list, we have LG’s rolling bot, a ball-shaped toy that can capture videos, something we have already seen in the past. It packs a camera lens, speakers, even a microphone and LG is advertising it as a practical way to exercise your pets thanks to the laser pointer. I’m not sure how fragile this thing is for a task like this.

Those were the 10 cool features we saw on the G5. LG has done something truly fantastic with its flagship this year with the modular approach, redesigned display. Other manufacturers are for sure going to have a hard time explaining why you should buy their products.

7 Cool Features of the New MediaTek Helio G90 and Helio G90T…
ColorOS 7 is Here: 15 Cool Features You Need to Know
Oppo and Xiaomi Show-off their Cool Under-Display Camera…
11 Cool Things about the Samsung Galaxy Note 10 and Note 10+
It sure is cool, and happening, but how much do you REALLY…
6 Cool Things About Pixel 6 and Pixel 6 Pro Officially…