With WhatsApp leading the pack, the app market seems to be spinning out messaging apps on a daily basis and while some of these do stand out with their unique features, most others fail to impress. RingID is yet another app that wants to bring people closer but it seems to be derive its inspiration from a completely different ideology. I have been using the app extensively for the last few weeks and it has fared impressively. 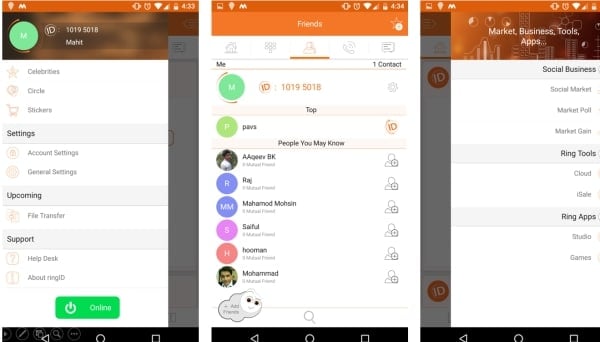 While the RingID boasts of quite a lot of new features, the deal maker for me was the ability to place voice and video calls over a congested sluggish network and also low speed connectivity. The app comes with a menu head that would allow you to navigate between Home, dial pad, contacts, call history and messages.

Getting on board is pretty easy with a OTP verification setup, however once the initial setup is done, things can get a bit crazy. Unlike WhatsApp, it doesn’t scan your contacts automatically and instead needs one of the party to send a request and another to accept. Adding to the confusion is the Ring ID itself, which is a eight digit number. Swiping right will give access to the left menu pane which mostly highlights the Social features of the app along with the Account Settings, General Settings and File Transfer toggle.

Plus, clicking on the huge green “Online” button will let you change your status to offline but this however will mean that you won’t be able to receive any sorts of notifications and updates. Swiping from left to right will reveal yet another menu pane which enlists the features you can only use in the future!

Skype has been unnecessarily moody for my taste. While it does serve the purpose, it rather struggles doing so. WhatsApp on the other hand also wimps when being connected to the cellular network (Beware my LTE Speeds hover around a little shy of 2Mbps!). Moreover, the call quality didn’t deteriorate even after prolonged duration of conversation.

In order to push the envelope further, I tested the app in 2G speeds and although the call quality had come down a notch or two, it was still remarkable. The video calling experience was not bad either but the drop in Internet speeds gave way for choppy frames and a delay in voice relay. That being said, the video call quality was at its best when the connection speed exceeded at least 2Mbps.

Even after trying to nit-pick about this app all I could find was a few downsides which could be overcome by a simple update. The social bit in this app somehow seemed unnecessary, adding to that the music and video curations were empty. As I expressed earlier, it takes some time to get used to Ring ID. Another let down is the number scanning system, I wished that the RingID scanned numbers from the contacts automatically and displayed the ones already using the RingID app.

We have used Skype, WhatsApp, WeChat and a slew of other messaging apps, but RingID takes the cake when it comes to high quality calls on low bandwidth. If it is pure texting you are looking for, RingID might fall short of your expectations, if it is audio calls and video calls, then the app is undoubtedly one of the best around. But is that enough to lure all your friends and family away from WhatsApp and WeChat? Give RingID a spin and let us know of what you think about this app.

Was this article helpful?
YesNo
TechPP is supported by our audience. We may earn affiliate commissions from buying links on this site.
Read Next
Android Messaging App Not Working? Try These 10 Best Fixes
#Messaging #RingID