Xiaomi has always managed to surprise us with the diversities in its product lineup, first it was the air purifier then the Ninebot Mini and now a premium bicycle. The QiCycle R1,as Xiaomi would like to call it, is a high end bicycle and the source of this is the leaked teaser, which by the way also reveals that the bike launch is due on 22nd of March. 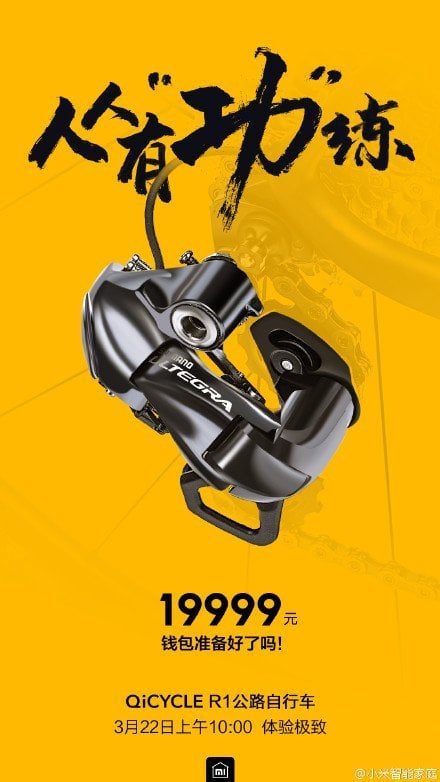 So far Xiaomi has always been associated with affordable phones that manage to pack the best hardware available without making a dent in your pocket. However, the QiCycle R1 seems to be a high end premium offering and the sticker price of 19,999 Yuan (apprx. $3070) further confirms the same. Coming back to the teaser, it apparently shows a Shimano Ultegra derailleur which is used for changing the rear gears in the cycle by helping it move across the sprocket.

That being said, it is also quite possible that this might be an electric bike since Shimano also manufacturers gear for the same. Despite the $3070 price tag the QiCycle R1 may shape up as a great choice for professional cyclists. On a related note we also harbor a feeling that Xiaomi will bring in a game changing feature with the bicycle and this is something interesting to look forward for. At this juncture the teaser decides not to reveal any more details including the features and the design of the bike. Since the news about the QiCycle is still in rumor phase we would advice you to take it with dollops of salt. Alternatively, If you are on a lookout for a high end bicycle its harmless to wait till 22nd of this month and give the QiCycle R1 a go.