OnePlus One was amongst the first few phones that surprised us all by offering range topping hardware with all the bells and whistles at less than half the price of a conventional smartphone. Termed as the Flagship Killer by many, the OnePlus One went on to become one of the sought after device and the invite only system made buyers yearn for the device more. However, OnePlus 2 which was launched last year failed to take off as expected it is alleged that the low sales also forced OnePlus to offer the OnePlus 2 on direct sale.

Now, the OnePlus 3 has been spotted on the benchmarks bearing a model number A3000 and the listed specs are as follows, 5.5-inch FHD display, Snapdragon 820 alongside the Adreno 530 GPU and 4GB of RAM/32GB of Internal storage. On the imaging front the OnePlus 3 is alleged to sport a 16-Megapixel front snapper and an 8-Megapixel secondary sensor. In all likelihood the OnePlus 3 will come preinstalled with OxygenOS based on the Android Marshmallow 6.0.1 . 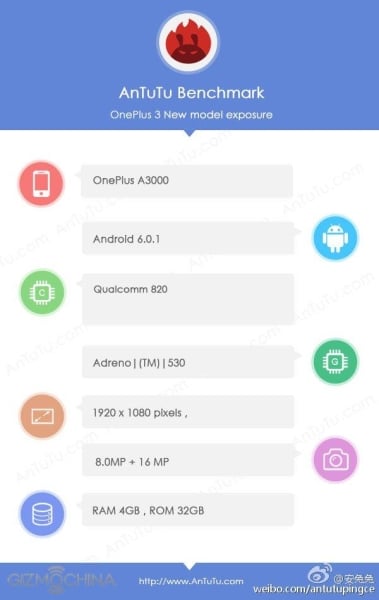 The impending OnePlus 3 launch is rumored to happen on April 7th and it is not surprising if more leaks or renders start surfacing before the actual launch. OnePlus 3 is something that can help the company to make a wild card entry but on the hitherto it also needs to battle out the recently launched Xiaomi Mi 5, which packs an impressive set of specs for the price it retails that. This somehow also makes me critical of the invite only model followed by OnePlus, i for instance have known some non-tech savvy folks who wanted to buy the OnePlus One but the invite only system eventually tired them out.

TechPP is supported by our audience. We may earn affiliate commissions from buying links on this site.
Read Next
OnePlus Nord Watch vs Amazfit GTS 2 Mini New Version: Which One Should You Buy?
#oneplus #OnePlus 2 #OnePlus 3