Xiaomi Redmi series has been one of the most sought after entry level Android smartphone and it was only in January this year that they had launched Redmi 3 which for the first time came with a metallic body and a bumped up camera. 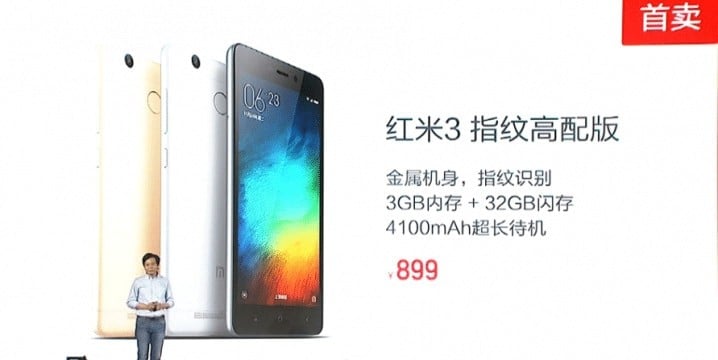 Keeping up with the Xiaomi traditions now the company has announced Xiaomi Redmi 3 Pro which comes with a better spec list as opposed to the Redmi 3. The Redmi 3 Pro features a 5-inch HD display and draws power from the octa core Snapdragon 616 paired with a 3GB of RAM which is an upgrade from the 2GB RAM in Redmi 3.

Improvisation on the storage front include a 32GB Internal Storage and also the usual microSD card slot. The Redmi 3 Pro comes with a 13-Megapixel primary sensor and a 5-Megapixel secondary sensor. Xiaomi has also added a fingerprint sensor making it one of the very few devices in the $100 range to sport the same. The Redmi 3 Pro runs on MIUI 7 wrapped over Android 5.1.1 and the beefy 4100mAh battery will ensure that the charge lasts for more than a day.

Xiaomi has been accused of denying India when it comes to the Pro variants but this time around they might very well skip the Redmi 3 and instead launch the Redmi 3 Pro directly. Currently, the Redmi 2 Prime is still doing rounds as the entry level offering from Xiaomi and it’s due time that it is replaced by an iterative upgrade. If you are thinking of buying an entry level Android Smartphone, we would advice you to hold the horses since even Yu is coming out with another 4G LTE enabled phone priced below the Rs 10,000 price range, as listed by the recent import details.

TechPP is supported by our audience. We may earn affiliate commissions from buying links on this site.
Read Next
With Redmi A1, is Xiaomi Resurrecting the Android One Dream, but Without Google?
#Redmi 3 Pro #xiaomi