Facebook Messenger is one of the most popular instant messaging services with nearly 900-Million active users. Facebook has been trying to bake in new features for the messaging services at regular intervals. Furthermore, Facebook will also be integrate the upcoming M virtual assistant into the Messenger. And now, Facebook has announced that it will be adding the support for SMS on the Messenger app for Android. 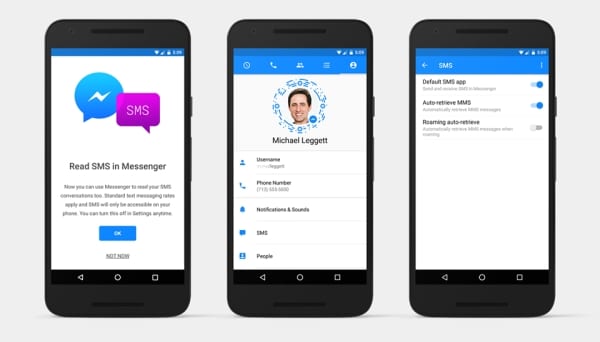 The Messenger aims at becoming your one stop shop for messaging needs and will be showing the Messenger notifications in blue and the SMS ones in Purple. The whole idea behind this new feature seems to be the point that Facebook doesn’t want the users to move out of the app for any messaging needs. The caveat though lies in the fact that one should select Messenger as the default SMS app.

SMS feature in Messenger will extend support for text, video, images, audio, emojis and stickers. Thankfully the SMS conversations will be kept local and will not be uploaded to the servers. The Messages will still be sent through the cellular network. To make use of the feature one needs to go to Facebook Messenger, select SMS and turn on the “Default SMS App.” We would however inform you that the roll out is still incremental and will take some time before its implemented for all the users.

If you are a heavy Messenger user, this new feature can work out great for you but for those of us not actually hooked to the Messenger it would be a not-so compelling switch. And since you cannot uninstall the native SMS application, it will just lie there. We also hope that the SMS feature in the Messenger app works offline and is more of a standalone feature. On a related note, the feature will be available only for Android since iOS doesnt allow third party applications to access SMS.

Instagram continues to get more desktop-friendly, adds…
Facebook announces Facebook Pay for Facebook, Instagram, and…
Asus ZenBook Pro Duo Adds a Secondary Display in Addition to…
iOS 13 Adds Dark Mode, up to 2X Faster Performance and a…
Disable Off-Facebook activity to prevent Facebook from…
How to Enable Support and Open HEIF and HEVC Files on…