Yahoo was in the news recently after it shut down the legacy version of Yahoo Messenger, a step that seemed more like streamlining its products. Yahoo now launched a new travel guide for iOS called the Yahoo Radar. The will beam the users with insights concerned with the neighbourhood and will also let users research the places one can visit.  As expected, it will also include information about the popular attractions, sightseeing and other interesting things to do. 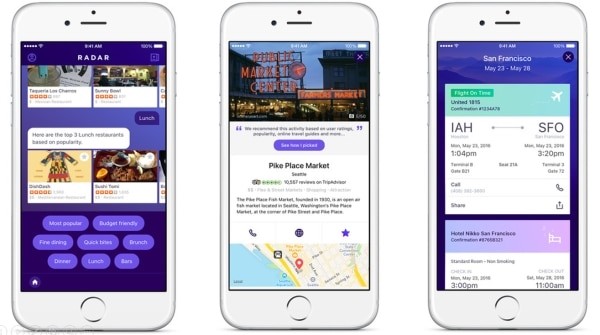 The caveat, however, is that the Radar app is not yet available for Android and yet another let-down is that the app would work out best for people who use Yahoo as their primary mailbox. The Radar app seems to be taking a cue from the AI interfaces as a result of which the app heavily relies on the chatbot-like interface.

Yahoo Radar borrows a feature or two from the Google Now, the application digs deep into your mailbox and skims the travel information stored within. Based on the vitals like the flight details and the car rental reservations the app formulates a suggestive itinerary for your trip. Furthermore, it also pulls your flight data on a real-time basis and will bombard with a notification if your flight is delayed or any changes in the boarding details.

The comforting part, however, lies in the fact that Yahoo had recently begun working with other email servers and this means that the Radar app will also work with Gmail users. The Radar app has been weaved with Yelp and Tripadvisor for travel content and just like AirBnB, the Radar also allows you to create a bucket list.

Yahoo has been betting big on its chat interface and the hope that this feature will act as a differentiator from other apps. The bot assist is pretty neat as it would throw open suggestions based on your query and help you make the reservations. That being said, Yahoo can fine tune the Radar so that the chatbot feature is more efficient.

TechPP is supported by our audience. We may earn affiliate commissions from buying links on this site.
#yahoo #Yahoo Radar