They are perhaps two of the best phones out there in terms of hardware and software in the sub-Rs 15,000 category. But if you had to choose between the Zuk Z1 and the recently launched Xiaomi Mi Max, which one would you go for? Let’s try to answer that one. 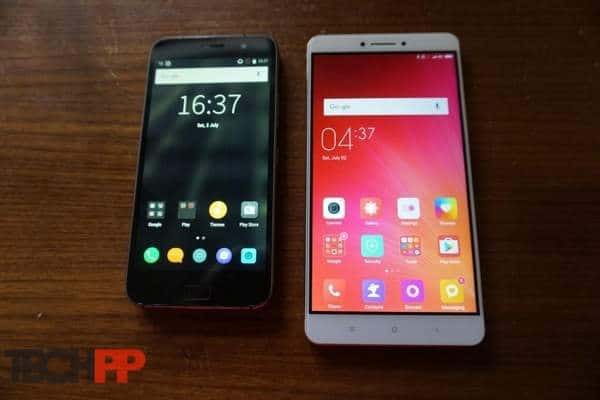 They say that beauty lies in the eyes of the beholder, and well, we have shown the Mi Max and the Zuk Z1 to a number of people and have got results that have been utterly varied, to put it mildly. And that’s because the two phones come from two very different schools of design. While the Max hits the eyes with its eyes, gold metal back and chamfered edges, the Z1 is more understated and curve-y and has a relatively plain back. Yes, the Max is significantly slimmer at 7.5 mm compared to the 8.9 mm of the Z1, but the sheer compactness of the Z1 enables it to hit back hard. With a length and width of 155.1 mm and 77.3 mm as compared to the 173.1 and 88.3 mm of the Max, the Z1 cuts a far more compact figure and is far easier to handle. And a closer look will reveal chamfers on it as well, although they are not as eye catching as those on the Mi Max. Let’s be brutally honest – the sheer size of the Mi Max will turn more heads but we feel that the Zuk Z1 is going to be the easier to handle. Who wins this one? We are hard pressed to answer but in the end, we will give it to the Mi Max for making a large display phone look relatively manageable, and classy too in the bargain. Those worshipping at the altar of compactness and simplicity are likely to prefer the Z1, we think. 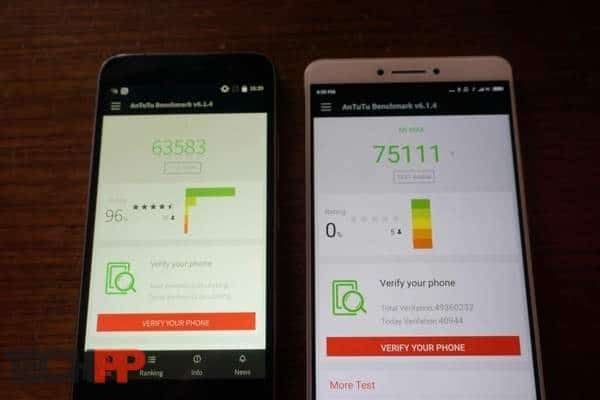 The Mi Max would seem to be carrying some pretty heavy hardware with its 6.44-inch full HD display, Qualcomm Snapdragon 650 processor, 3 GB RAM, 32 GB storage (expandable) and 4G, Wi-Fi, Bluetooth and infra red connectivity. And it packs in a large 4850 mAh battery. But the Zuk Z1 is no mug either – it too has a full HD display, and its being smaller (5.5 inches) gives it slightly higher pixel density. On the processor front, it sports the old-and-now-showing-its-age but still competent Snapdragon 801 chip, and packs in 3 GB RAM with 64 GB on board storage, with no expandable options. It too comes with 4G, Bluetooth, GPS and Wi-Fi but has no infra-red or VoLTE support. And its battery, while being smaller, is not exactly tiny at 4100 mAh! Some might claim that the 801 was a flagship class processor, but that was almost two years ago and two years is a long time in mobile technology. We are handing this one to the Mi Max.

On the surface, this might seem like a cakewalk for the Max, which runs Android 6 as compared to the Android 5.1 on the Zuk Z1. But those changes become clear only when you scratch the surface – on the surface, this is a battle between two of the most different Android UIs you will see: MIUI 7 on the Max and Cyanogen 12 on the Zuk Z1. And both are due to get updated to newer versions in the coming days. In their current avatars, they offer differing experiences to the user. While MIUI 7 with its host of features and bright colors and animations is likely to appeal to more mainstream users, we can see the geek and stock Android loving brigade gravitating towards the slightly more Spartan Cyanogen. Speaking for ourselves, we love the sheer speed and smoothness of Cyanogen but the feature set of MIUI 7 just wings it for us. 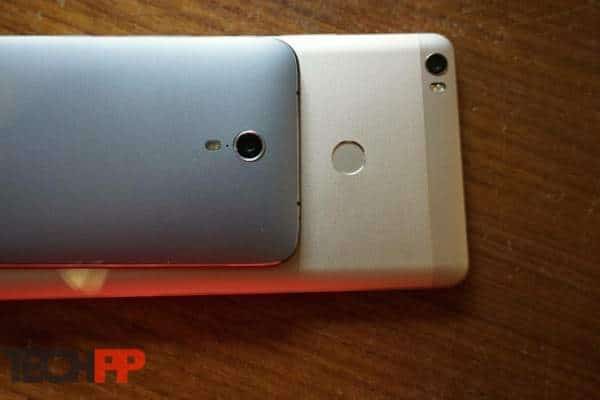 It has better software, it looks better, it has better hardware – all of which should make the Mi Max the easier device to use, right? Ahem, wrong. In a scenario that is oddly reminiscent of the Apple-Samsung phone battles a few years ago, the Z1 actually gets on the scoreboard in this round by dint of simply being much more compact. Its form factor makes it easier to use not just in routine tasks like browsing the Web and sending messages and handling calls but also in taking photographs and in using the fingerprint scanner – the scanner below the display on the Z1 is far easier to use than the one on the back below the camera on the Mi Max which almost always necessitates a change of grip to get to it. The Force is with the Zuk Z1 in this one. 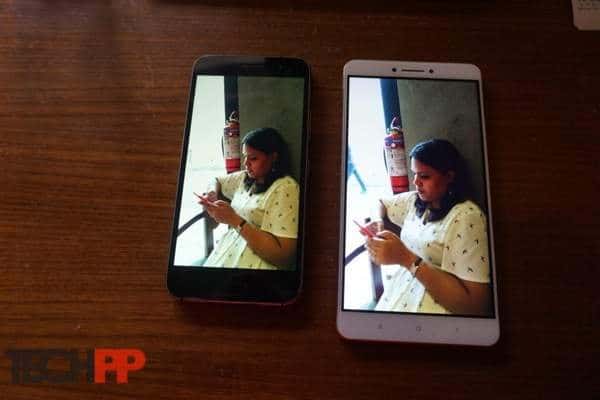 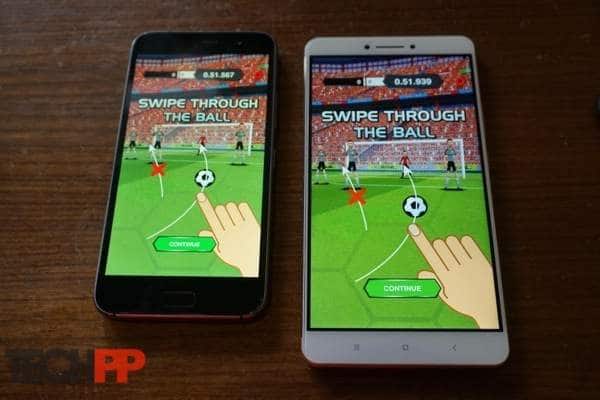 It is one hell of a battle here. Its larger size makes the Mi Max more fun to play games on and well, in terms of sheer gaming performance, there is not too much separating the two devices, although those who prefer playing endless runners might find the one-hand friendliness of the Z1 more attractive. Cut to multitasking, however, and we suspect that Cyanogen makes its presence felt as the Z1 seems to handle matters just a tad more smoothly – it is not as if the Mi Max is slow, but just that the Z1 seems to handle things faster. We are calling this one a tie as both functions are important, but yes, those who value gaming will prefer the Mi Max, while those into multiple tasks and apps might lean towards the Z1.

Get into the movie and video watching zone and the battle turns into one of two very good displays with different shades of tint – the Mi Max has a slightly reddish one while the Zuk Z1 has a yellowish one (so reminiscent of the Moto displays). But it is here that the Mi Max literally throws its weight around – that big display is great for watching films, even though the audio quality (oh headphones) seemed better on the Z1. In loudspeaker mode too, the Max has slightly higher volume levels, making it more suitable for being watched by more than one person. We are not saying the Z1 is bad here but the Max pretty much bosses this department with its big screen.

In terms of general day to day usage – calls, e-mail, Web browsing, social networking and the like – the phones are very closely matched. We never really encountered any problems in terms of lags or crashes. Closer inspection however revealed the following differences:

All this combined with the slightly smaller frame of the Zuk Z1 makes it edge this round in our opinion. We think those that give greater weightage to battery life will prefer the Mi Max but honestly, the choice there is between very good and slightly better.

Let’s put it down in black and white – the Mi Max starts at Rs 14,999, while the Zuk Z1 starts at Rs 13,499. The Max supporters might say that the additional bucks get you a larger display, a higher megapixel count camera, a newer processor and a bigger battery, but the Z1 defenders can claim to a more compact form factor, a better performing camera, a display with higher pixel density, much more onboard storage, and a battery that is not too bad. Had they been priced the same, this would have been a walkover for the Max, but its lower price wins the Z1 this round. 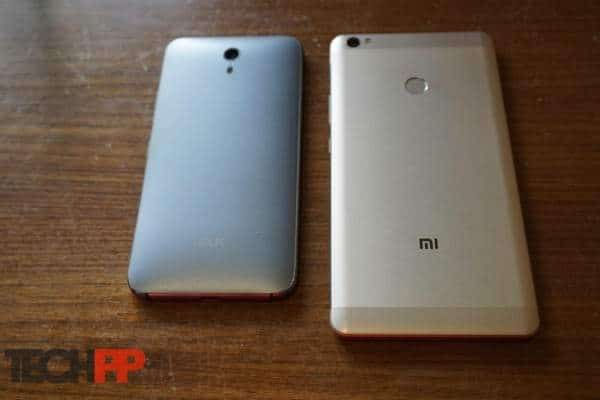 We compared the devices on nine parameters and in terms of pure score, the phones finish all square 4-4 with one round being shared. Many people would award the battle to the Mi Max simply because it wins on the hardware, software and design fronts. But then the Z1 holds sway in ease of use, general usage and in a budget conscious nation like hours, price! So who wins then? It’s all a matter of weightage, we think. Let’s simplify it:

Still stuck? We wish there was an easier answer.

It is like choosing between Captain America and the Hulk. On paper, you would think the Green Monster has all the aces. But think carefully and the Cap ain’t too bad either.

The silver lining? No matter which one you choose, you get an Avenger.