In the hustle bustle of our daily life, we seldom find the time to interact with our Neighbours and are unaware of our neighbourhood. It is for this reason that Nearby has created an App (both Android and iOS) and a Facebook Page to connect the neighbours and help them do things together. The app also reminds us of all the advantages one would have with local networking and how life would eventually be much simpler. 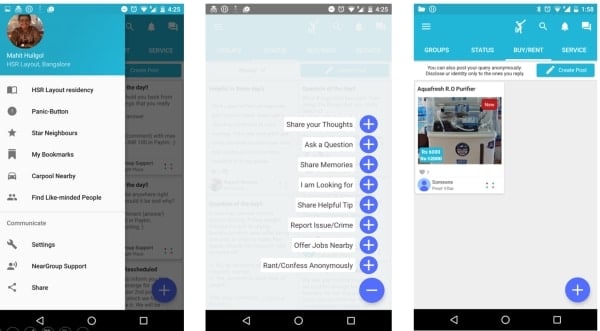 The NearGroup app lets one interact with your verified neighbours and together build a community. All of this can be done anonymously and you can reveal your identity only once comfortable to do so. Once you have installed the app it will ask for your locality and it is only after you select the locality the stuff get displayed. The features in the app include Panic button, which will warn the neighbours if you are in trouble, more like an SOS feature with a local touch. Selecting the like-minded people to feature will hook you up with your neighbours who share your interests.

The app also lets you create a group for the neighbours and network in a better way. These are some of the options that open up a slew of channels for the people residing in the same locality to know each other and do things in a better way. For instance, the car-pool option is something that will not just help you save on the fuel bill but also commute in a much eco-friendlier way. The app is also designed in such a way that it would address the safety issue for women.

If you want to sell some stuff or just borrow some tools from your neighbour it can be done putting up a classified in the Buy/Rent section. Another interesting feature is that users can list out everything from the best pan wallah in the locality to the best restaurant and it can be upvoted too. In a nutshell, the NearGroup app shapes up as the hub and helps the entire neighbourhood stay connected virtually. Furthermore, it would also foster the spirit of conducting and taking part in group activities centred in the locality.
That being said, the app, however, needs to be fine tuned to detect the exact location and I particularly found the activity level in some of the cities including Bengaluru to be less. Overall, a decent attempt at bringing the entire neighbourhood together and build the synergies.

How to Sync Fitbit With Apple Health and Access All Your…
Handing your phone to a friend? Make sure they can use only…
Samsung Galaxy M31s Review: Bang Between a Note and a Nord…
How to Find Air Quality of a Place Using Google Maps
Truecaller introduces Group Chat feature on Android and iOS
Sony WH-1000XM4 with Speak-to-chat and Multi-point…