It’s no surprise that OEMs take smartphone exploding incidents exceedingly serious as the story eventually spreads out like fire (no pun intended) and can impact the product’s and company’s image in the industry. We’ve seen quite a few shocking cases in the past caused either while charging or regular usage due to some hardware defect. However, last week, Xiaomi’s Mi4i was the center of concerns after a user reported his handset exploding horribly.

Ajay Raj Negi posted a terrifying CCTV footage on Xiaomi’s Facebook page showing his phone detonating into pieces while he was comfortably using it in his office. As you can see from the attached video itself, this wasn’t a normal case and could have done an awful lot of damage to Ajay if he had been not paying attention. Fortunately, no one was hurt in this case. The unit was purchased from Flipkart, although, we surely can’t blame the seller for this. 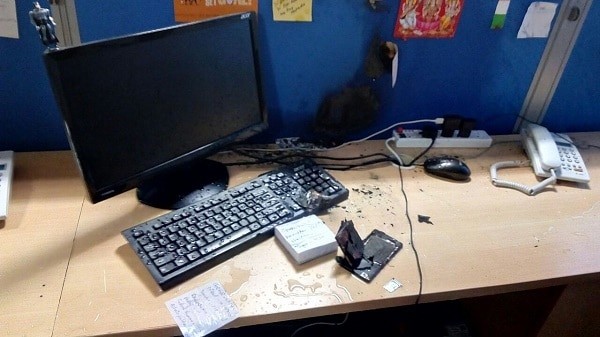 Consequently, we reached out to Xiaomi’s team asking about the steps taken to ensure future safety. Commenting on the event, a Xiaomi India spokesperson stated, “We take such matters seriously and we have already been investigating the matter. We have been in touch with the customer and will be getting his device this week to do further investigation. In the meantime, we have offered a replacement phone to the customer.”

It is worth pointing that Xiaomi’s Mi4i (and Snapdragon 615) did already suffer from heating issues, an update for which was rolled out didn’t calm the issue much. Smartphone incidents have always come and gone in the recent years with no intact measures whatsoever. Trying to embed the most powerful hardware while keeping the price low does create a mess if the manufacturer isn’t careful during the quality assurance period. The last incident reported for a Xiaomi handset was way back in 2013. Nevertheless, it might just be a faulty unit or something not directly related to the phone at all.

Was this article helpful?
YesNo
TechPP is supported by our audience. We may earn affiliate commissions from buying links on this site.
Read Next
With Redmi A1, is Xiaomi Resurrecting the Android One Dream, but Without Google?
#Mi4i #Mi4i Heating Issue #xiaomi