LeEco seems to be playing its cards well, the Le 1s and the Le 2 are known to be one of the most sought after smartphones in the respective price range. LeEco already seems to be readying the Le2s and the same has been spotted on the GFX Benchmarks. Listed as LeEco X720 the device is powered by the quad-core Snapdragon 820 alongside 4GB of RAM. Furthermore, according to the benchmarks, the display on the Le2s is a 5.5-inch FHD unit. 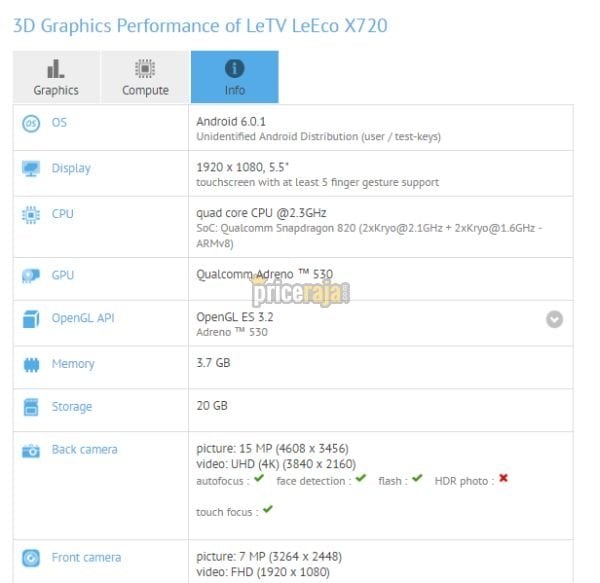 On the storage front, the Le 2s is listed to offer 32GB of internal memory.and is expected to ditch the memory card slot, unlike its nemesis the Redmi Note 3. The imaging setup includes a 16-Megapixel primary sensor and an 8-Megapixel secondary sensor. The Le 2s will be running Android 6.0.1 Marshmallow out of the box.

However, this is not the first time we are hearing about the Le2S as recently a couple of live images claimed to be that of Le 2S surfaced but the previous round of rumors said that the device will come equipped with a staggering 8GB of RAM. Since the Le 2S is not exactly the flagship offering from the company it is safe to assume that the device will come with 4GB of RAM. In essence, the new LeEco 2S will sport an improvised camera, bumped up processing unit and maybe some slight tinkering with the design.

TechPP is supported by our audience. We may earn affiliate commissions from buying links on this site.
#Le 2S #LeEco