Alongside the Pixel smartphones, Daydream View VR, Google Home and Chromecast Ultra; the MountainView based giant has also unveiled a new WiFi router. It’s called the Google WiFi and is built on a new approach to providing seamless and uninterrupted WiFi network to every part of your home.

Google’s first attempt developing a smart WiFi router started early last year when the company introduced their OnHub series in partnership with Asus and TP-Link. Now, Google claims that their smart wireless router is based on their learning from their OnHub routers. Rather it is a marked improvement over the predecessor.

Google WiFi is not just smaller than the OnHub range of routers, but is more efficient too thanks to a new form of Eero-style mesh network. Basically, a number of Google WiFi routers can work in tandem to spread the same WiFi network across your home. Say, for example, you have a Google WiFi setup in your bedroom, another in the kitchen and another in the living room. Now all these three will work together to spread a strong network signal to every corner of your home. This setup is referred to as a Google WiFi point network where each Google WiFi functions as a point. Google claims that each Google WiFi point in a network makes use of a unique mesh-WiFi to determine the best path for your data; thereby navigating through walls, door and windows. 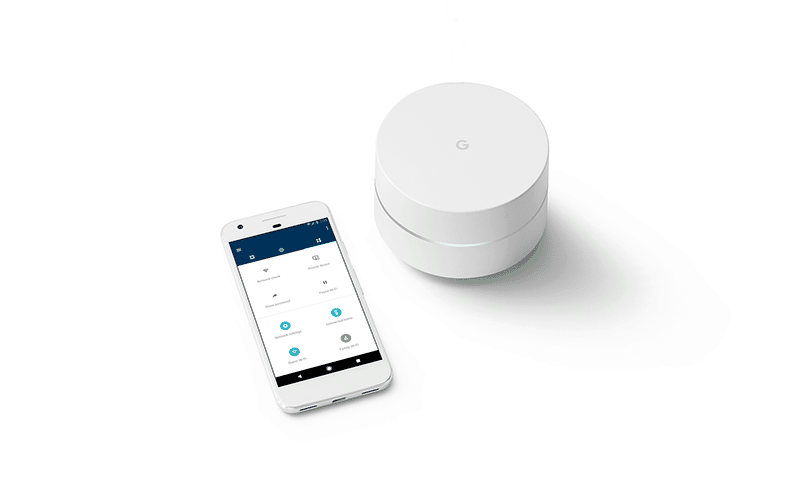 Google WiFi comes with a Network Assist technology that works behind the scenes to keep the WiFi fast so that you as a user needn’t bother about how to adjust your router. The Network Assist automatically places on the clearest channel and optimal WiFi band for your device. That aside there’s a companion app for the Google WiFi that makes it simple for granularly controlling people on your network. This includes ability to block any device from using the network temporarily or permanently, see how much bandwidth each device is consuming and even prioritize a device on your network.

The smart WiFi from Google will be available for pre-orders in US starting November at a retail price of $129 via Amazon, Best Buy, Walmart and Google Store. One can however opt for three Google WiFi in a pack at $299. This is beneficial for those who require their WiFi to cover larger range. Google however hasn’t announced details regarding the international rollout of this router.

Was this article helpful?
YesNo
TechPP is supported by our audience. We may earn affiliate commissions from buying links on this site.
Read Next
How to Record Your Screen on a Chromebook
#google #Google WiFi #wireless router