Hardcore Gamers have always shied away from the laptops and stuck with building their own gaming rigs and pumping it up to the max. If you are in the gaming scene Razer is likely a household name, from Mouse, to actual gaming rigs, Razer has done it all. This time around, however, Razor has unveiled its 2016 laptop and it comes filled to brim with top end class leading hardware that is bound to quench your gaming desires. Until now Razer blessed the laptops with modest specs and usually came with a processor that was a lagging a generation but all that is set to change with the Razer Blade Pro. 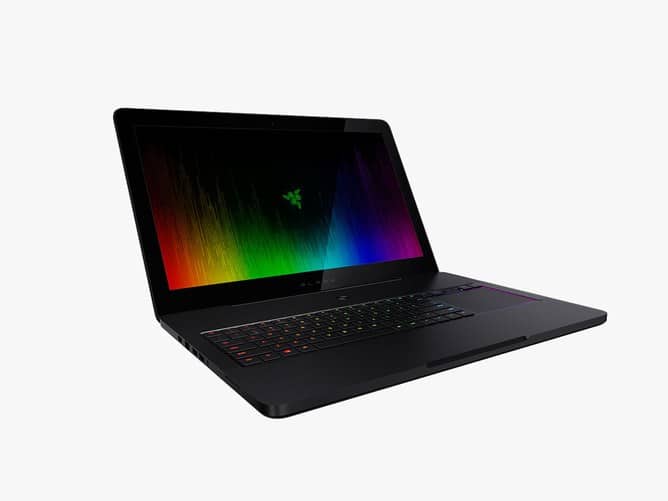 Before we begin, this is not a laptop you would be happy to carry around or shove in your crowded backpack but instead, think of Razer as a miniaturised version of a fully blown gaming rig. Well, even Razer is advertising the product with a slogan that says “The Desktop in your Laptop.”

Razer Blade Pro is propelled by a 2.66GHz quad-core Intel Core i7-6700HQ CPU. The list starts getting better with 32GB 2133MH DDR4 RAM, 17.3-inch IZGO touchscreen which is a 4K display that can handle any graphic intensive stuff thrown at it with sheer grace. The ports include 3x USB 3.0, card reader and a Thunderbolt/USB-C jack. The laptop is backed up by a humongous 99-watt-hour battery which is ironically the highest capacity of the battery that one would allow on an airplane.

The Keys, the Lights and the TouchPad

It’s interesting to see how the folks at Razer have ensured that each and every aspect of this laptop is made to please the gamers and the attention to details is just staggering. The low profile mechanical keyboard ensures low travel. Well, the Razer doesn’t run out of good things this fast, the “Razer Chroma” mood lighting is a user configurable rainbow light show which also lets you change the background of the keyboard.

The touchpad in this laptop doesn’t sit under the keyboard in a tiny little space, instead, Razer has moved the touchpad towards the right along with a bunch of keys. Despite being bigger it doesn’t miss out on features and comes with a scroll wheel for selection and media player shortcuts.

All of this hoopla around the Razer Blade Pro is aptly justified by the desktop-class Nvidia GeForce GTX 1080 GPU which is complemented by 8GB of GDDR5x VRAM. Also, the Razer Blade Pro is the thinnest laptop with Nvidia GeForce GTX 1080. All of this raw power is sure to generate some heat and cooling the system off is a vapor-chamber cooling system. Razer had to design the cooling system from scratch in order to suit the Blade Pro’s requirements.

The vapour chamber is actually a fully enclosed system in which coolant fluid is made to reach a boiling point and then vaporises, similar to the automobile radiators except for the vaporising part. Vaporisation carries the heat away from the laptop and is further helped by the internal fans that redirect the hot air away from the user.

Weighing in at 8 pounds (3.54Kgs) it certainly isn’t the lightest laptops around but considering the goodness it packs we are sure that the gamers won’t mind the bulk. Also, the company is expecting professional video and photo editors to use this machine as it will match their configurational needs.

Good things don’t come cheap and the Razer Blade Pro is no different. The Razer Blade Pro starts at $3700 and that is for the 512GB SSD . The top of the line fully loaded model with 2TB of SSD will set you back by a cool $4500. All of the variants will be available in November.

TechPP is supported by our audience. We may earn affiliate commissions from buying links on this site.
Read Next
Dell Alienware M15 R7 Review: Premium But Not Perfect
#Gaming laptop #razer #Razer Blade Pro