Microsoft, today at their New York event, unveiled a significantly powerful and upgraded variant of the Surface Book which was announced last year. While most of the aesthetics are similar, Microsoft has managed to radically fit in better hardware, more batteries, in the same aluminum form factor. They’re referring it as the Surface Book i7. 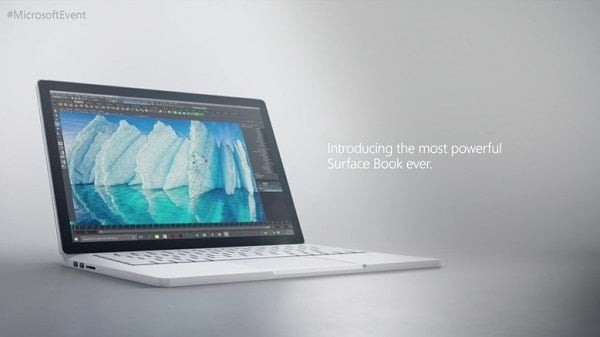 To start off, the new Surface Book improves battery life by 30% and can now, according to Microsoft, last up to 16 hours on normal usage. As the name suggests, it features the latest generation core i7 processor and doubles the graphics performance. Theoretically, it is three times faster than the highest end 13-inch MacBook Pro but we’ll discuss that after the Apple MacBook event. For keeping things cool, Microsoft says they’ve reengineered the cooling system and the latest Surface Book utilizes a more efficient thermal system. The company hasn’t revealed any other details such as storage availability or the amount of RAM.

Other than that, the rest of the Surface Book is entirely identical to what they unveiled last year – a hybrid ultrabook with a detachable display and a bundled stylus. It comes with a 13.5” PixelSense™ Display, backlit keyboard, glass trackpad, and obviously, runs on Windows 10. Surface Book i7 will be available for pre-order starting from today itself for a whopping $2,399 and shipping will commence sometime in November. Microsoft is primarily aiming advanced users who mostly work with resource demanding professional tools such as Photoshop or video editing and also, gamers who need something portable for casual gaming sessions.

Along with the new Surface Book, Microsoft also launched a revamped version of their legacy Paint app as a part of their free upcoming Creators update. The updated application majorly aims to simplify the process of creating 3D models and digital images. You can read more about it here.

Was this article helpful?
YesNo
TechPP is supported by our audience. We may earn affiliate commissions from buying links on this site.
Read Next
How to Use Snap Layouts and Snap Groups in Windows 11
#microsoft #Surface Book i7